December 25 means the Triumph of Christianity over Paganism 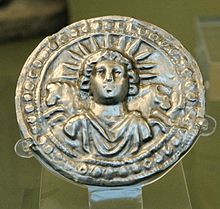 Yes, we’ve all heard the JW, Free Presbyterian, and Puritan arguments that the 25th of December was originally a pagan festival to celebrate the birth of the sun god Sol Invictus, Dies Natalis Solis Invicti, “the birthday of the unconquered sun,” therefore, Christians should not celebrate Christmas because it is a pagan holiday. There might be some truth to this. The 12th century  Syrian bishop Jacob Bar-Salibi wrote: “It was a custom of the Pagans to celebrate on the same 25 December the birthday of the Sun, at which they kindled lights in token of festivity. In these solemnities and revelries the Christians also took part. Accordingly when the doctors of the Church perceived that the Christians had a leaning to this festival, they took counsel and resolved that the true Nativity should be solemnised on that day.” Yet I would point out that historians actually question which came first, the Christian festival of Christmas, or the pagan festival to Invictus, both were celebrated on Dec 25, but who did it first is not clear.  The truth is that the selection of Dec 25 for Christmas could have been taken over from any number of winter solstice festivals.

But let’s grant a Christmas vs. Sol Invictus competition vying for people’s religious attention in the third and fourth centuries of the Roman Empire. What does it mean? Well, you might notice two things. First, some of the third century emperors like Aurelian and Decian who persecuted Christians were devoted to Sol Invictus. Decian wanted to unify the Empire around the worship of Sol Invictus, and thus sought to purify the Empire of Christians. Second, note also the forthright desire of some European intellectuals to return western civilization back to a pagan pluralism  as if paganism will lead to a more open minded and tolerant society (see Alain de Benoist’s On Being a Pagan). Bad news for Decian – his empire is gone and Jesus not Solus Invictus is celebrated on Dec 25. Bad news for neo-pagans like de Benoist, as long as “Hark the Herald Angels” and “O Holy Night” are songs people hear, sing, and enjoy at Christmas, they don’t stand a chance in hell.

Christmas means that the unconquerable god of the Romans just got conquered. A pagan Roman holiday just got stuffed with more Christianity than a December Turkey stuffed with spiced bread crumbs. Dawkins can issue a secular intifada against Christianity all he likes, but we got the best holiday, the best music, and the best message – joy to the world and peace on earth. So Christmas ain’t going away any time soon.

Tertullian wrote: “We [Christians] are but of yesterday, and yet we already fill your cities, islands, camps, your palace, senate, and forum. We have left you only your temples” (Apology 37). To that I would, add: “Oh, FYI, we just stole your holiday and crowned Jesus as King of kings on top of  a city with seven hills, sitting on a big bad ass throne using Jupiter, Sol Victus, and Caesar as a foot rest. Hope that’s okay, if not, too flipping bad.”

Christmas means that Jesus has defeated the powers, the pagan gods that military rulers used to bring their peoples into subjection, to oppress all dissent, and to bring misery upon the masses of men and women.  Christmas means that the tyranny of paganism – its pantheon, politics, and power – have been broken by a Jewish man who died on a Roman cross. Christmas means that the power for peace does not come from a Roman legion, but is heard in the anthem of a legion of angels singing praises to the infant Jesus. Christmas means that the pagan kings who, “To robbery, slaughter, plunder, they give the lying name of empire; they make a solitude and call it peace” have been robbed and plundered of the one thing which gave them power: fear. Christmas means freedom from the worship of the state so that we might enter into the state of worship of the one true God and his Son. Christmas means the greatest social reversal since Cinderella because, as Mary sang,  “He has brought down the powerful from their thrones, and lifted up the lowly (Luke 1:52 NRSV)” (shh, don’t tel the Tea Party, St. Mary might be launching a class war on the rich!). Christmas means God has entered into the lowliness of the human estate in order to raise humanity up to the ceiling of heaven. Christmas means that what stands between heaven and earth is not a plethora of gods with the sexual ethics of Charlie Sheen and the behavior of an  undisciplined toddler with superpowers, but the man Jesus Christ who came, lived, and died to reconcile humanity to God. Christmas means the victory of God over the inhumanity and irreligion of paganism. So I say, bake that ham, roast that turkey, pour forth the wine, sing and make merry, cause Jesus just kicked the Roman gods and all the evil that they stood for in the testiculus – why not celebrate it!

December 19, 2011 Why I'm Not a Pagan ... the Movie "Dragnet"
Recent Comments
157 Comments | Leave a Comment
"Very good and helpful article, succinctly sums up the core ideas of biblicism. Contrary to ..."
Alin Christoph Cucu What is Biblicism?
"I am sorry, but a theologian with Dr. Richter's reputation, training, and influence should not ..."
Chris Arch Sandra Richter Responds to John Piper
"Protestants are great about denouncing the "infallible" pronouncements of Catholic popes...except when it comes to ..."
Gary M The Case for the Dynamic View ..."
"The Koran and The Book of Mormon have more evidence supporting their divine inspiration than ..."
Gary M Plenary Verbal Inspiration and its Problems
Browse Our Archives
get the latest updates from
Euangelion
and the Patheos
Evangelical
Channel
POPULAR AT PATHEOS Evangelical
1