What would Karl Barth say about Tim Tebow 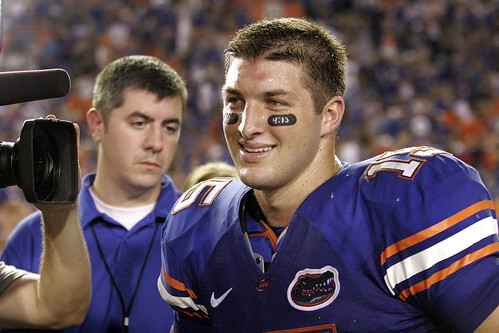 Yes, I know that Tim Tebow Keeps Winning! He’s a great football player.Though I use the term “football” rather loosely since its played by obese effeminate men wearing more padding than a pillow factory and they are hardly athletes if they cannot run for longer than 30 seconds without a three minute break, but I digress. Also, Tebow is evidently a devout and gracious Christian man, so he’s a great role model. But I just have to say that this whole God and Tebow thing is starting to get a bit rich for my liking. Even my own buddy Denny Burk writes that: “I think the kinds of gifts that Tebow has ultimately come from God. In that sense, there is some divine intervention going on in the Bronco’s season. In that sense, it is also right to give credit where credit is due.” Divine intervention, that is a big call Denny (though see Owen Strachan’s piece at TGC for a more moderate approach). Is there some “divine intervention” going on here or is it more like God’s general providence in showing his goodness to creation by creating men and women for work and leisure and he does so in such a way that inevitably some human bodies are better at sports than others. In that regard, God blesses some, but not others. As Abraham says in the movie, Year One, “We are the Hebrews. Righteous people, but not very good at sports.” I don’t think God is on the side of the Denver Broncos anymore than he’s on the side of the Brisbane Broncos. I mean, what would it do to our idea of providence and grace if we were to think that God was rewarding Tim Teabow’s zealous faith with football victories? I don’t like where it would take us about the character of God. We can enjoy the fact that God gave us football and he gave us bodies to play it with, and some bodies are just made better for it than others, oh, and it helps a lot if you practice too!

What is more, what would Karl Barth say about all this? If we were to ask Barth if God is specially moving among the Denver Broncos in response to Tim Tebow’s faith, what would the Barth-man say? Now this was a theologian who didn’t believe that you could find God in nature or even in stain glass windows at church. Barth was furiously Word-centric. So I think Barth’s response would be something like this: 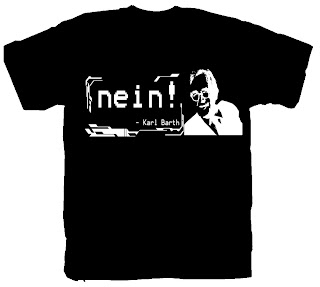 Nein! We find God in his eternal, living, and confronting Word. No way, not now, not ever in footballs, on astro turf, or among hotdogs and American beer. God became man, not pebble covered leather. We believe in the all supremacy and finality of Jesus Christ and not in man made temples of chalk, grass, and beer. So burn your idolatrous footballs, stop invoking the Almighty name of the Father at football games, cease making Teabow a talisman of good fortune, and just enjoy the stupid game!

January 9, 2012
Christian Cynics, the Future of the Church
Next Post