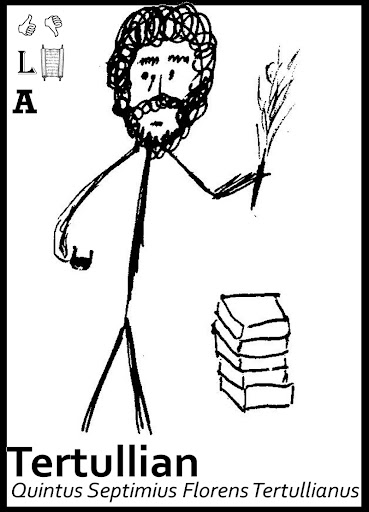 This week I’ve been reading some Tertullian when I’ve had the chance. Gotta quote his opening to book five from Against Marcion:

If you challenge us to your belief, (pray) tell us what things constitute its basis. Either prove the truth of what you believe, or failing in your proof, (tell us) how you believe. Else what conduct is yours, believing in opposition to Him from whom alone comes the proof of that which you believe? Take now from my point of view the apostle, in the same manner as you have received the Christ—the apostle shown to be as much mine as the Christ is. And here, too, we will fight within the same lines, and challenge our adversary on the mere ground of a simple rule, that even an apostle who is said not to belong to the Creator-nay, is displayed as in actual hostility to the Creator—can be fairly regarded as teaching nothing, knowing nothing, wishing nothing in favour of the Creator whilst it would be a first principle with him to set forth another god with as much eagerness as he would use in withdrawing us from the law of the Creator. It is not at all likely that he would call men away from Judaism without showing them at the same time what was the god in whom he invited them to believe; because nobody could possibly pass from allegiance to the Creator without knowing to whom he had to cross over. For either Christ had already revealed another god—in which case the apostle’s testimony would also follow to the same effect, for fear of his not being else regarded as an apostle of the god whom Christ had revealed, and because of the impropriety of his being concealed by the apostle who had been already revealed by Christ—or Christ had made no such revelation concerning God; then there was all the greater need why the apostle should reveal a God who could now be made known by no one else, and who would undoubtedly be left without any belief at all, if he were revealed not even by an apostle. We have laid down this as our first principle, because we wish at once to profess that we shall pursue the same method here in the apostle’s case as we adopted before in Christ’s case, to prove that he proclaimed no new god; that is, we shall draw our evidence from the epistles of St. Paul himself. Now, the garbled form in which we have found the heretic’s Gospel will have already prepared us to expect to find the epistles also mutilated by him with like perverseness—and that even as respects their number.

February 13, 2012 Prayer of the Sixth Week after Epiphany
Recent Comments
15 Comments | Leave a Comment
Browse Our Archives
get the latest from
Euangelion
Sign up for our newsletter
POPULAR AT PATHEOS Evangelical
1