The Divinity of Jesus in Early Judaism

The Divinity of Jesus in Early Judaism April 22, 2012 Joel Willitts

Did the early followers of Jesus in their claim of divine status for Jesus go beyond early Jewish assumptions about the end-time redeemer? Did their beliefs move from Jewish to Christian? 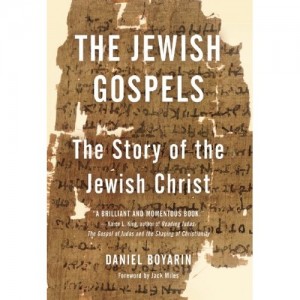 That’s the question Daniel Boyarin tackles in the first chapter of his new book The Jewish Gospels. In this chapter, Boyarin discusses the question of the title “Son of Man”. Not surprisingly I suppose, his view goes against the grain of most contemporary scholarship. Boyarin argues that Son of Man should not be a thought a reference to Jesus humanity (as is commonly thought) but to his deity. The difference is perhaps best illustrated by the new CEB translation in which the standard translation of the phrase is ” the human one”. Boyarin says,

To make this assertion stick, Boyarin first shows that the title “Son of God” is another way to say Messiah, the Davidic king. This term in its Hebrew context does not refer to a divine being but to an earthly and actual king. “When Mark in the very beginning of his Gospel writes, ‘The beginning of the Gospel of Jesus Christ, the Son of God,”‘the Son of God means the human Messiah, using the old title for the king of the House of David” (30).

The bulk of his argument however is on the Hebrew and, more specifically, Danielic background of the title “Son of Man”. Boyarin summarizes the vision from Daniel 7 this way,

He is a divine figure.
He is in human form.
He may very well be portrayed as a younger-appearing divinity than the Ancient of Days.
He will be enthroned on high.
He is given power and dominion, even sovereignty on earth.

These traditions between the time of Daniel and the New Testament had been merged with Jewish expectations of a Davidic king, and consequently, the idea of a divine-human Messiah was born, according to Boyarin. Furthermore, this figure, says Boyarin, was named “Son of Man” alluding to his origins in the divine figure named “one like the Son of Man/a human being” in Daniel: “a God who looks like a human being (literally Son of Man) has become the name for that God, who is now called ‘Son of Man,’ a reference to his human-appearing divinity” (33).  Quoting Leo Baeck, Boyarin summarizes, “Whenever in later works ‘that Son of Man,’ ‘this Son of Man, or the Son of Man’ is mentioned, it is the quotation from Daniel that is speaking” (34). Thus, “we end up with a doubled godhead and a human-divine combination as the expected Redeemer” (34). What is important for Boyarin is that this is not a Christian development. The New Testament is echoing a widespread Second Temple belief: “The connections between the older pre-Jesus ideas of the Messiah/Christ and those that Jesus would claim for himself are thus very intimate indeed” (34).

On the question of the title “Son of Man” used in the Gospels: Here’s Boyarin’s assumption, similar to Baeck’s above, “All such usages (of “Son of Man”) must have been an allusion to the pivotal chapter of the book of Daniel” (36).

Now Boyarin’s chapter is quite dense, although accessible. His position is based on a view that Daniel 7 is “a house divided against itself” because it leaves a reader with contrary information: the Son of Man is both a second divine figure and a collective earthly figure, the faithful of Israel. Boyarin’s interpretation is based on the assumption that the author of the canonical text of Daniel (written in the Maccabean period) tried to suppress the earlier Danielic vision of the theophany (7:9-14)–this vision the author would have inherited from the tradition–by inserting the angelic interpretation in which the Son of Man is made a collective term for faithful Israel (7:15-28).  Boyarin then concludes,

The theology of the Gospels, far from being a radical innovation within Israelite religious tradition, is a highly conservative return to the very most ancient moments within that tradition, moments that had been largely suppressed in the meantime-but not entirely . . . It follows that the ideas about God that we identify as Christian are not innovations but may be deeply connected with some of the most ancient of Israelite ideas about God (47).

Irrespective of the highly speculative nature of Boyarin’s argument, the claim that Daniel 7 contains both ideas,  individual and corporate, with one not outstripping the other is interesting. What’s more, the assertion that two divine beings is a thoroughly Jewish idea is extremely provocative. I have not studied the issue of the Son of Man sufficiently enough to have any definitive evaluation. However, I think Boyarin’s argument could open up new trenches for research. For example, (and it is possible that this trench has been dug already at least partially) I’m left wondering what is the relationship between the king and the corporate people in ANE kingship ideology and what does this bring to bear on the question of Daniel 7 and the relationship between the two sections of the text? Furthermore, what is the relationship between Davidic expectations and the Danielic vision? In a footnote Boyarin comments that R. Aqiva associated the second divine figure as an apotheosized (= a man made a god) king David (41). This is a very intriguing piece of evidence.

April 23, 2012 The Voice Translation
Recent Comments
2 Comments | Leave a Comment
Browse Our Archives
get the latest updates from
Euangelion
and the Patheos
Evangelical
Channel
POPULAR AT PATHEOS Evangelical
1