Book Notice: What Are They Saying about the Gospel of Thomas

Book Notice: What Are They Saying about the Gospel of Thomas September 26, 2012 Michael F. Bird 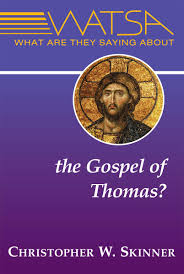 Christopher W. Skinner
What Are They Saying About the Gospel of Thomas?
New York: Paulist, 2012.
Available at Amazon.com

There has been a salvo of Gospel of Thomas (GTh) studies recently with volumes by Simon Gathercole, Mark Goodacre, and now a helpful overview of scholarship by Chris Skinner.

Skinner usefully looks at several areas and gives a state-of-play as it is in scholarly circles:

In every case Skinner’s treatment is succinct and fair. He doesn’t grind any axe. In fact, it is difficult to identify where Skinner himself would land on several issues. He is not heralding GTh as a gateway into the “real Jesus,” nor engaging in apologetic polemics against GTh.

I rather liked the discussion on GTh and the canonical Gospels and the debate about whether GTh is dependent on them. I’m guessing that the majority are probably in favor of dependency.

The book is successful in its aim of helping the non-specialist navigate the maze of GTh scholarship. Besides reading GThom, I recommend it for anyone who is hoping to get a grip on what all the fuss about GThom is about.

September 26, 2012 Winston Churchill on Writing a Book
Recent Comments
1 Comment | Leave a Comment
"This is a false accusation. Here's an article written by Phil Johnson in which he ..."
Rodrigo Avila Do We Need a Code of ..."
"I'll still laugh and point at the majority of you, but > Xtianity: It is ..."
Steven Watson Before I Went to Seminary I ..."
"dia pistis Iēsous Christ I suspect the ambiguity, both here and in other places, is ..."
Steven Watson Rom 3:21-26 – Translates, Paraphrase, Notes
"Second Temple Judaism spoke of YHWH being two "prescences". After Christianity the rabbis declared this ..."
the old scribe Philo, the Two Powers within Israel’s ..."
Browse Our Archives
get the latest updates from
Euangelion
and the Patheos
Evangelical
Channel
POPULAR AT PATHEOS Evangelical
1

A Letter to Christian Parents about...
Anxious Bench
Books by This Author Books by Mike Bird