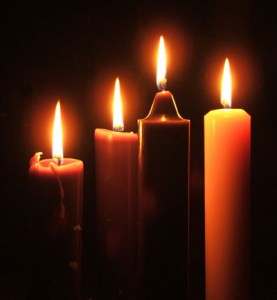 A couple of weeks ago, Thanksgiving Eve to be exact, Karla and I marked an anniversary of sorts; we celebrated the 20th anniversary of our engagement. Let me just say, I did it right. I asked her to marry me at the top of the Hancock Building in downtown Chicago. It was Nov 23rd, 1992. From that moment until July 31st, 1993 we were in waiting for the wedding. At first it wasn’t that big a deal to wait. I still had my last semester of university left, a graduation, and mission trip to Mexico in mid-May.

But once summer came the waiting got much more challenging. For the two months of summer, June and July, I decided to live near Karla in Wheaton, IL. Karla’s parents found a family for me to live with for the time, and I had a job with Karla’s brother-in-law who was an arborist, someone who trims trees. I spent many a long day splitting wood in the hot sun at a wood dump that summer. These two months of waiting were brutal! For two solid months I had deep dissatisfaction coupled with intense anticipation.

The feelings of dissatisfaction and anticipation are part and parcel of intense waiting. And it is these two feelings that are the essence of Advent. Like my summer of waiting to be married back in 1993, the Advent season is a way for Christians to be regularly reminded of the discipline of waiting.

Advent begins this Sunday, Dec 2nd. And I want to challenge you to join me again this year to organize your spiritual life around Advent spirituality for the next four weeks leading up to Christmas.

You may have grown up in a church or home where Advent was an annual celebration. And for you Advent was little more that a ritual. For others of us, and this is my background, I came to understand the meaning of Advent only very recently. The church I grew up in and the tradition of Christianity I’ve been apart never made Advent a centerpiece of the Christmas celebration.

Let me begin with a simply definition. The term “Advent” comes from the Latin word adventus which means “Coming”.  At its simplest, the Christian observance of Advent is a month’s reflection on the coming of Jesus the Messiah. The celebration of Advent began back in the 6th century and has evolved to the what it is today. You can learn more about Advent in various sources. I recommend Robert Webber’s Ancient-Future Time.

As a family we will again this year have an Advent devotion through the four weeks of Advent. We will use the Advent Wreath as the center of our devotion. I can recommend a few sources for those interested in celebrating Advent with a young family. This year we’ll be using this devotion by Jeanne Preski, Praying For Christmas: Children’s Advent Wreath Devotions. I’ll be supplementing this with other things from the resources I list here. For example we’ll definitely be using the said prayer “O Gracious Light”.

Other resources I’ve looked at are:

We Light the Candles, by Catharine Brandt

Celebrating Advent in the Home – I used this devotion last year and enjoyed the traditional prayers and the recitation of O Gracious Light (Phos hilaron).

Advent 2012, A Family Devotion – This devotion has been created by my church’s children’s ministry. It  doesn’t have any traditional prayers, but it provides brief summaries of the Scripture passages which is useful.

I pray that we lean into the holy dissatisfaction and hopeful anticipation that should characterize our lives as followers of Jesus.

December 2, 2012 The Meaning of the Advent Candles
Recent Comments
1 Comment | Leave a Comment
"I'll still laugh and point at the majority of you, but > Xtianity: It is ..."
Steven Watson Before I Went to Seminary I ..."
"dia pistis Iēsous Christ I suspect the ambiguity, both here and in other places, is ..."
Steven Watson Rom 3:21-26 – Translates, Paraphrase, Notes
"Second Temple Judaism spoke of YHWH being two "prescences". After Christianity the rabbis declared this ..."
the old scribe Philo, the Two Powers within Israel’s ..."
"Good stuff, Mike! Thanks for posting this."
James Allman Rom 3:21-26 – Translates, Paraphrase, Notes
Browse Our Archives
get the latest updates from
Euangelion
and the Patheos
Evangelical
Channel
POPULAR AT PATHEOS Evangelical
1