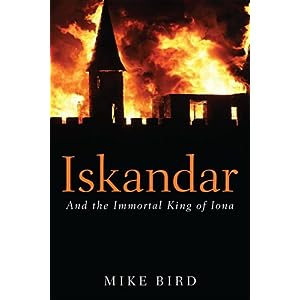 I am proud as punch to announce the release of my first novel Iskandar and the Immortal King of Iona. In a nutshell, “Iskandar” is a religious themed fantasy novel (more like LOTR than the Narnia Chronicles). It has messianic themes, good vs. evil, redemption, immortality, deification, an evil god named “Marduk,” determinism vs. freedom, even a minor character called “Aquinas.”

The story is set in the mythical kingdom of Iona where King Morpeth and Queen Prisca are seduced by the  evil demi-god Marduk and promised deification if they would  sacrifice their children to him. They nearly succeed, but two children, Jakov and Iskandar, escape alive with the help of their uncle Fallkirk. Morpeth and Prisca nonetheless become immortal and use their powers to tyrannize the country and to hunt for the children since they shall not become fully divine until their surviving sons are dead. The two boys share in the elemental powers granted to their parents, and after some years of separation, the two boys are brought back together to lead an army to overthrow the immortal king Morpeth and to liberate Iona from his reign. Yet Jakov’s ruthless quest for revenge against his parents is matched by Iskandar’s self-doubt as to whether he can really do what is asked of him. Added to the picture is a mysterious knight who periodically intervenes in their journey and it is unclear whose side he is on. It is a story with epic battles, gigantic trolls, magic, betrayal, romance, intrigue, and unexpected twists.

Buy from either Wipf & Stock or else at Amazon.com.

January 22, 2013
John Dickson's Rejoinder to Criticisms of "Hearing Her Voice"
Next Post