A New New Testament with New Additions … Not Kidding 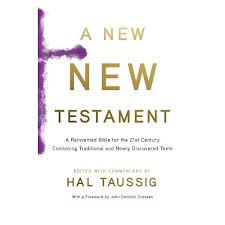 I can’t believe I stumbled across a book called A New New Testament edited by Hal Taussig and foreword by John Dominic Crossan. The publisher of the book includes this blurb:

In February of 2012, a council of scholars and spiritual leaders,convened by religion scholar Hal Taussig, came together to discuss,debate, and reconsider which books belong in the New Testament. They talked about dozens of newly found texts, the lessons therein, and how they inform the previously bound books. Reading the existing New Testament alongside these new texts—The Gospel of Luke with The Gospel of Mary, Paul’s letters with The Letter of Peter to Philip, The Revelation to John with The Secret Revelation to John—offers the exciting possibility of understanding both, the new and the old, better.

Bruce Reyes Chow discusses his involvement with the project over on his blog.

There is also a video here:

Okay, I’m all for encouraging the study of extra-biblical texts, esp. early Christian literature from the second and third centuries. But you CAN”T just gather a council of nineteen buddies and decide to put new books in the New Testament. It’s a great marketing ploy, but these folks don’t seem to have a grain of catholic or canonical respect.

Imagine if I assembled a group of nineteen Australian political scholars to start adding amendments to the US constitution: Stuff like it would be illegal to kiss a koala and drink Fosters while watching the movie Crocodile Dundee; Crocodile Dundee II and III would be banned; Americans would have to switch to the metric system; NFL would be replaced with AFL; the Electoral College would be replaced with a Houston vs. Boston cage fight to determine the next POTUS; vegemite would replace peanut butter; and all hamburgers would have to have beetroot added to them.

I can’t help but think that for these folks that the Synod of Laodicea (363 AD) is something that happened to other people.

I blame Ken Schenck for not keeping his Methodist homies in line! Hope Michael Kruger takes a nice deep breath before he writes a response!

March 12, 2013
Timothy George - The New Pope Should be Catholic!
Next Post