The Mysterious Victory of the Cross Over Evil

The Mysterious Victory of the Cross Over Evil March 28, 2013 Michael F. Bird 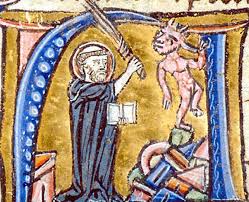 This semester I’ve been teaching a course on The Doctrine of God and the Work of Christ, and we’ve had lectures on the death of Jesus in the last two weeks. During the lectures we’ve looked at the various modes or images of the atonement with a view to expositing the many things that the cross achieved. We’ve noted that Satisfaction, Exemplary, Penal Substitution, and Christus Victor images are not mutually exclusive. I’ve also argued, see here, that Christus Victor is the hub of the atonement. While the cross is many things – a sacrifice, an example, a source of transformation – it is fundamentally God’s victory over evil: personal evil (sin), impersonal evil (suffering), and supernatural evil (Satan). I like how Calvin put it: “And so, by fighting hand to hand with the power of the Devil, with the horror of death, he won the victory over them and triumphed, so that now in our death we should not fear those things which our Prince has swallowed up” (Institutes II.16.11).

On the same theme, Simon Smart of CPX has a good piece on ABC’s The Drum on The Mysterious Victory of the Cross Over Evil. Smart writes:

“The impenetrable mystery of evil meets the paradoxical mystery of the cross,” is how French theologian Henri Blocher puts it. For those still convinced by the veracity of the gospels, Jesus’ crucifixion and his resurrection tell us of God’s mastery over evil and his plan to ultimately defeat it once and for all. That’s what will be being preached in churches this weekend if you are tempted to look in. Through what looks like the ultimate defeat, the cross, evil is crushed, turned back on itself, conquered in the end by love and self-sacrifice. It’s not until we face the reality of “Friday” that the full joy of resurrection Sunday becomes apparent. That is real joy as opposed to the limited and superficial optimism to which our culture appears prone. Easter is the news that while evil is all too real, both around us and to some extent within us, there exists in the Christ story a defiant hope and a promise of ultimate justice, restoration and the renewal of all things. It’s the notion that God is not indifferent to human struggle and pain. It’s a vision that will still have the capacity to inspire countless millions around the world this Sunday.

March 28, 2013
The Cross, More than A Religious Symbol
Next Post

March 30, 2013 My Favorite Easter Flash Mob
Recent Comments
2 Comments | Leave a Comment
"This is an important rebalancing of the view of women in theology. For too long ..."
Falconlights The Gospel according to Eve
"Hello Michael,Some have issues with others who do not live America and attempt to diagnose ..."
Jeff Tyler Jesus and Violent Nationalism
"Michael: Your suggestion that ministry boards should have a gender balance, in order to prevent ..."
Clarke Morledge Responding to the Ravi Zacharias Sexual ..."
"How "God's" kingdom came to the America's, all of Asian, Africa, New Zealand, Australia etc ..."
Jonathan Barker Jesus and Violent Nationalism
Browse Our Archives
get the latest from
Euangelion
Sign up for our newsletter
POPULAR AT PATHEOS Evangelical
1