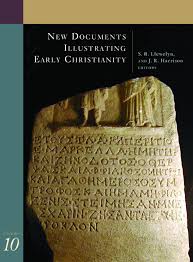 The NDIEC series should be on the shelves of everyone who is seriously interested in the history behind the New Testament and first centuries of the church. Put together by a team from Macquarie University, they have put compiled another collection of texts that illuminate the world of the apostles and the nascent church. It contains transcriptions from ancient papyri and inscribed artefacts with a view to discussing what it tells us about the ancient world and the NT. This volume has a good discussion of Artemis and Acts 19, the imperial cult in Asia, evidence that Colossae was not destroyed in 62 AD, the succession of Hadrian and the ascension of Christ, Augustan “grace,”  and an index of the ten volumes in the series so far.Worth owning the entire series, many gems on NT background found here.

June 25, 2013 The Perfect Storm
Recent Comments
0 | Leave a Comment
Browse Our Archives
get the latest updates from
Euangelion
and the Patheos
Evangelical
Channel
POPULAR AT PATHEOS Evangelical
1