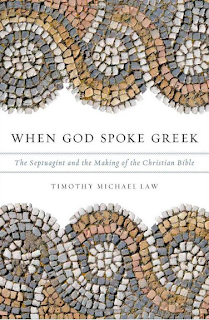 T. Michael Law
When God Spoke Greek: The Septuagint and the Making of the Christian Bible
Oxford: OUP, 2013.
Available at Amazon.com

Okay, I’m probably a bit behind the game on this one, but I’ve only recently finished reading T. Michael Law’s excellent introduction to the Septuagint. I have to confess that I read the chapters while I was bathing my two boys over the last two weeks. It’s a cracking good read, easy to take in, technical stuff is easily explained, and very illuminating about the origins of the Hebrew Bible (HB) and Greek Old Testament (LXX).

It was during seminary that I began to learn about the import of the LXX for the NT. First, in Romans 4, Paul employs a midrashic interpretive technique by combining two passages together (Gen 15:6 and Ps 32:2) based on a common word. The common word is logizomai, but – and here’s the thing – they only have a common word in the Greek not in the Hebrew. Thus, the LXX provided a hermeneutical possibility that would not have been available if Paul had used a Hebrew version of the text. In that sense, it is the LXX and the HB that shaped Paul’s precise argument about justification by faith. Second, a comparison of Amos 9:11-15 reveals some serious differences between the LXX and HB. The HB has Israel conquering Edom in v. 12, but the LXX has the Gentiles seeking out after God. What is more, James in Acts 15:15-18 quotes the LXX version not the HB version to justify the inclusion of Gentiles in the church! I was able to continue my interest in the LXX with a commentary on 1 Esdras and providing the translation of 1 Esdras for the CEB (Apocrypha).

Any way, Law successfully describes the context and debates about the origins of the LXX, he describes the text critical issues concerning the Hebrew and Greek Old Testament, and demonstrates the canonical issues posed by the widescale use of the LXX in the early church.

Some will no doubt contest several things that Law says. His references to the plurality and fluidity of the Hebrew text of the Old Testament will make some squirm. And others will want to nuance or qualify his remarks about the text of the Hebrew Bible and the process of the canonization of the Hebrew version by the ancient church.  In any case, whether you agree with him or not, he raises the textual, canonical, and hermeneutical questions that the church’s use of the LXX presents for us. This is not a book I would give to conservative lay folks, cause it might freak them out, but it is definitely necessary reading for anyone interested in pursuing advanced knowledge in biblical studies.

A good review of TML’s book is also made by Brian LePort who provides a summary of each chapter.

There is also an interview with Michael over at First Things about the book which is quite helpful.

October 4, 2013
Moss and the Myth of Persecution
Next Post