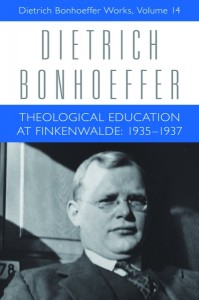 In the new volume of Dietrich Bonhoeffer’s Works, Vol. 14: Theological Education at Finkenwalde: 1935-37, there are some very interesting (to me) observations made by Jürgen Henkys in the “Editor’s Afterward to the German Edition”.

In particular, I note five particularly interesting observations Henkys’s makes about what emerges from the present collection.

(1) Finkenwalde was a protest and a prophetic discipleship against and in relationship to the dramatic take over of the German Church by the Nazis and the response of the Confessing Church. The Preachers Seminary was founded in response to the Confessing synods of Barmen and Dahlem in 1934. As the Seminary opened with its second of five sessions it was declared illegal by the state in a statement called the Fifth Implementation Decree published on 12/2/1935. The seminary opened its doors in April 1935 and was closed in September 1937 by the Gestapo.

(2) The Bible was the primary resource for Bonhoeffer in the Finkenwalde years. Particularly as everything was being reconsidered by the Confessing Church in response to the challenge of the Third Reich.

It is no accident that the Bible stands at the beginning and the end of this enumeration . . . Everything that had to be justified anew here—with respect to pastoral care, ecclesiastical politics, ecumenical and dogmatic issues—could not be addressed adequately at the level of traditional academic theological deduction (975).

(3) But the Bible is read anew in light of the present experience. There is an important hermeneutical approach Bonhoeffer takes as evidenced in his lectures and sermons. He sees that there is a need for something in addition to historical-critical exegesis. The Church Struggle becomes a hermeneutical lens for reading the Bible aright.

His writing, teaching, proclamation, and admonitions were all guided now by a new manner of reading the Bible, a manner with which not even he had much familiarity yet; the Bible was now to be read with an eye on the decisions—both imminent and past—that affected the church’s concrete present (975).

Bonhoeffer allowed the contemporary theological and ecclesiastical conflicts to shape the lecture’s task (984) Bonhoeffer’s hermeneutics pointed him in the direction of exegesis substantively shaped by the church’s own contemporary experience rather than exegesis somehow removed from time. As he reminded his candidates, academic theological departments were not the ones carrying the Church Struggle and were thus unaware of this question regarding the space of the church; those carrying that struggle were instead the pastors and congregations themselves. Bonhoeffer concludes, ‘the theology and question of the church develops from within the church’s own empirical experience and encounters. It receives blows and realizes: the body of the church must take this or that particular path. (985)

In the Bible study (“The Reconstruction of Jerusalem according to Ezra and Nehemiah”), the path to a contemporary statement or position does not emerge from any comprehensive examination of the biblical textual material nor from any enumeration of the results of historical scholarship regarding that material. What moves the exegete instead is the urgent question already on the table, concerning the church dispute and the theological assessment he has already made about this issue. The edifying elements and orientation solicited from the text itself emerge not by way of exegetical derivation and historical considerations. Rather, it is discovered, recognized anew, welcomed as confirming challenge by an exegete who reads Scripture with the assurance of the truth of the struggling church itself, which has already decided in favor of the understanding of its confession required by the contemporary situation (998).

(4) The New Testament was the primary textbook for the training of the seminarians.

The most distinctive feature of Bonhoeffer’s teaching at Finkenwalde is his exegesis of the New Testament in session after session (982).

The lecture on homiletics is the most unequivocal example of the pastoral-theological emphasis in Bonhoeffer’s Finkenwalde instruction. Here the term “pastoral-theological” refers to the perspective from which Bonhoeffer introduced his understanding of the sermon and of other topics and areas of church praxis, a perspective enormously influenced by personal professional experiences (his own or those of others) and by a concern for those persons to whom such is also to be related for the sake of the office they are to assume. Here a pastor speaks to other pastors about what it means to be a pastor with respect to the sermon, to instruction and to pastoral care. Rather than diminishing theological reflection, this relationship focuses it even more clearly, developing that reflection further, and rendering it fruitful for the relation between pastoral office and person (993-94)

November 29, 2013
Reflections on ETS and the Conference Theme of Inerrancy
Next Post