Was Bonhoeffer a Conspirator? 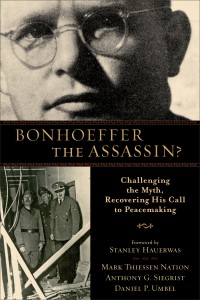 It is a foregone conclusion among many scholars, and certainly the wider public, that by the late 30’s Dietrich Bonhoeffer had changed his view on violence. While earlier in the 30’s he had articulated a perspective on violence that could be characterized as pacifism rooted in his interpretation of the Sermon on the Mount captured clearly in Discipleship, the realities of Nazi German had caused him to see the necessity of violence in the face of such evil. This interpretation of Bonhoeffer finds its plausibility in his later letters from prison and his unfinished Ethics that was later published by Eberhard Bethge.

But a new book robustly challenges this assumption. And it is quite convincing. The thesis of  Bonhoeffer the Assassin?: Challenging the Myth, Recovering His Call to Peacemaking

is that this widely held belief is flat wrong. When one looks carefully at Bonhoeffer’s life and his writings one finds that Bonhoeffer was consistent throughout his life on the question of violence. His work in the Abwehr, which is often pointed to as evidence of his involvement in the conspiracies, does not necessitate his participation in the plot(s) to assassinate Hitler. According to the argument of the book, Bonhoeffer’s decision to join the German Intelligence agency was his way of avoiding service in the military. Further, there is no evidence of his involvement in these plots.

Bonhoeffer was a conscientious objector, but not a conspirator.

Let me summarize the five key arguments (summarized in the conclusion) in this well-argued and well-written protest:

2. Bonhoeffer claimed that he had become a Christian pacifist. He believed it was “self-evident” in light of the Sermon of the Mount. There is no evidence to suggest that he recanted that statement.

3. Bonhoeffer’s rejection of an ethic based on principles does not negate seeing Bonhoeffer closely aligned with pacifism. With Barth, Bonhoeffer rejected principled pacifism for pacifism in practice secured in Christology.

4. Bonhoeffer focused his attention on the attention to the needs of the most vulnerable in society.

5. The interpretation of Bonhoeffer’s legacy as on of a theologian who later became a conspirator needs to be at the very least revised, if not fully rejected.

Here’s what Stanley Hauerwas said in his foreword:

What they have done is nothing short of revolutionary. Through careful scholarship they have called into question the fundamental assumption that seem to make the question about Bonhoeffer’s participation in the plot against Hitler, as well as attempts such as mine to respond to that question, problematic . . . There is no indication in Bonhoeffer’s life or work that he ever abandoned his pacifism to join a plot to kill Hitler.

Those of us who admire Bonhoeffer’s life and writings will need to seriously reconsider our assumptions about him in light of this book. I for one now have another reason to continue to think through the Christian pacifist position. It feels that God’s trying to get my attention on this point. For a recent and well articulated perspective Christian non-violence see my friend Preston Sprinkle’s book Fight: A Christian Case for Non-Violence

December 27, 2013
My Therapist is Christ on behalf of Me
Next Post