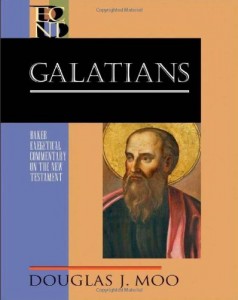 This is an unorthodox endorsement of Doug Moo’s Galatians commentary.

Late last year, sometime in early November I think, I bumped into Doug Moo on campus at Wheaton (I’m you might say “moonlighting” at Wheaton College teaching as a guest professor here and there). I’ve known Doug for a number of years primarily as the father of my friend Jonathan Moo who now teaches at Whitworth College in Spokane, Washington. Jonathan is a great guy and good friend. The Moo’s did well with him! Truth be told also I once sat across a table from Doug with 30 other faculty in 2005 as I was being interviewed for a tenure track position at Wheaton, which I was not offered!

Of course, previous to knowing Jonathan, I knew of Doug for years through his commentary writing. I can remember using his Romans commentary on exegetical papers in seminary. We actually bumped into each other in the computer services office, each there to deal a computer issue.

After we greeted each other with the standard stuff, I congratulated him on the publication of his Galatians commentary – it had just been released. I had not gotten a copy yet, so I had no direct knowledge of it, but writing commentaries, as I’m personally discovering, is challenging work and I think finishing one is something to celebrate.

His response to my congratulatory words, however, was both surprising and interesting. I didn’t expect it. He jokingly said, “You’re not going to like it!”

My first response was surprise: how would he even have an opinion about “what I would like”?  In the moment I felt like I had somehow arrived at some professional achievement. Doug Moo knew what I thought about something, or at least thought he knew. He had labeled or categorized me and could differentiate my view from his own. How cool is that?! While at one level that may be off putting (wait, what does he think I think?!), it was satisfying. The second feeling was I wondered what he meant? Of course, I didn’t have to think too long about that, because my views on Paul’s relationship to Judaism, some of which are published, puts me in a very different camp than the traditional “law-gospel” antithesis approach of which Doug’s Galatians commentary is the latest and perhaps best evangelical example. Our greeting was brief, as we both were running in and out of computer services, but left an impression on me and made me all the more interested in reading and interacting with Doug’s Galatians.

The commentary also couldn’t have been published at a better time for me as I am deep in the writing of my own Galatians commentary for the Story of God Commentary Series published by Zondervan due out hopefully next year.

After reading portions of Moo’s commentary (and I will read every page of it as I write my own), I think, however, he was only partially correct in his prediction of what I would think about it. On the one hand, he was right. On a few of the most important key theological issues and not a few interpretations of key passages, I do not think his reading (and to be fair, the reading of the reformed tradition, as there’s little to no theological novelty in this commentary) best explains the text of Galatians in its historical context. Let me give two examples. First, a theological point. While I agree that Paul would reject the idea that by means of effort one could achieve salvation (salvation by good works), I don’t believe that the central theological anthesis at the heart of the letter is one between effort and faith. In my reading of the Paul and the Bible, effort and faith are inseparably linked (the “obedience of faith” [Rom 1:65; 16:26]). Faith is hard work and discipleship takes every ounce of effort one has. Jesus and Paul call would-be believers to a life of strenuous effort in spirit-generated perseverance. So I agree with the abstract theological idea (by effort no one enters the kingdom of God), it is only by the atoning rescuing faithful obedience of Jesus the Messiah; but I don’t agree that this issue is Paul’s concern in Galatians.

Another example where I think our company parts that I have just recently noticed is in Galatians 2:11-21, I’m working on this thorny passage now. Moo’s outline of 2:11-21 divides vv. 11-14 from vv. 15-21.  While I can appreciate the need to subdivide units for the convenience of commentary discussion, it seems that this fissure is deeper. By dividing them, Moo suggests implicitly, if not explicitly, that somehow 2:15-21 is a separate unit from 2:11-21. But there is no exegetical basis for this separation. And as such it takes way the narrative context within which 2:15-21 is to be read, which then allows for something other than Paul to determine what is most important in the passage. A reality that is evident in many readings of Galatians. Reading 2:11-21 as a unit makes a significant difference. When read within the story, the emphasis in the passage shifts elsewhere. Galatians 2:15-16 may be a thesis statement for the gospel of grace, but it is not the thesis statement for the book, because structurally it isn’t even the most important assertion of the paragraph within which it appears. Instead the emphasis of the argument lands on the verses that follow, and this is made clearer when the passage is kept together. Paul’s response to Peter and therefore the interpretation of the event, runs from 2:14-21 without disjuncture.

In my analysis, Peter and Paul agree on the content of 2:15-16. That’s where Paul begins: “we know . . .” The issue that caused the so-called “incident”, Paul then articulates in 2:17 and elaborates on further in 2:18-21. The problem Peter had was hermeneutical, not primarily, although not unconnected to soteriological concerns. How are we to live in light of the truth of the gospel? Peter was vacillating because he was interpreting Torah by the wrong frame of reference. And because of that he assumed that his interactions over table fellowship with Gentiles would besmirch the reputation of the Messiah: But if, in seeking to be justified in Christ, we Jews find ourselves also among sinners, doesn’t that mean that Christ promotes sin? Absolutely not!” In 2:18-21, Paul describes his “hermeneutical conversion” resulting from his union with the Messiah. Paul’s framework for interpreting the Torah has changed. His association with Gentiles in eating meals together in this new Messianic halakhic framework no longer means he is a sinner. That that is true for Peter too. Peter must have a similar one if the is to “walk in line with the truth of the gospel”. This is perhaps a much too detailed discussion for our purpose, but it shows, that there are other and better in my view ways of putting the pieces of the text of Galatians together.

But lest you think I have a totally negative view of the book, let me emphasize that Doug was only partly right. I actually think this is an excellent commentary. One of its strengths is that Doug interacts with a wide variety of positions on almost every exegetical question. There have been several times that I have found paths to helpful secondary sources that Doug dismissed (funny!). But to his credit Doug mentions and interacts with them. One such example was the interpretation of the phrases in 2:7 “gospel of the uncircumcised” and “gospel of the circumcised” (lit.). Doug dismisses the view of Schnelle that there may be differing elements of gospel implied in these alternative “gospels” (134). I, however, had been thinking that very thing. Doug’s mention of Schnelle’s discussion led me to look it up and read it, which, in the end and perhaps to Doug’s chagrin, further convinced me that I was correct in my understanding, and that Doug too harshly dismissed Schnelle’s more nuanced view. Nevertheless, I think this is a testimony, albeit unorthodox, of the strength of this commentary. And more importantly of the character of the commentator. Thanks Doug!

Denny Burk label’s Doug Moo’s Galatians commentary a must read. He hails it, along with Schreiner’s Galatians as the best examples of the non- (or anti-) New Perspective approaches (I happen to think that Moo’s is superior to Schreiner’s though). This may not be an overstatement. And it’s further evidence of  entrenchment of the traditional (non-new perspective) reading of Paul among a certain segment of evangelicals. I would label myself as post-new perspective. When my commentary is completed (I hope someday!), it will of course pail in comparison to Moo’s in its level of detail and perhaps in many other respects, but it will present the diversity of evangelical opinion on Paul today. In the end, when it is published my commentary will be on the other side of Richard Hays’ Galatians, perhaps the best example (although Jimmy Dunn’s is very close) of an evangelical (though I’m not sure if he’d gladly wear the label) New Perspective reading of Galatians.

February 20, 2014 Conference: Ecclesia and Ethics II
Recent Comments
5 Comments | Leave a Comment
"Very good and helpful article, succinctly sums up the core ideas of biblicism. Contrary to ..."
Alin Christoph Cucu What is Biblicism?
"I am sorry, but a theologian with Dr. Richter's reputation, training, and influence should not ..."
Chris Arch Sandra Richter Responds to John Piper
"Protestants are great about denouncing the "infallible" pronouncements of Catholic popes...except when it comes to ..."
Gary M The Case for the Dynamic View ..."
"The Koran and The Book of Mormon have more evidence supporting their divine inspiration than ..."
Gary M Plenary Verbal Inspiration and its Problems
Browse Our Archives
get the latest updates from
Euangelion
and the Patheos
Evangelical
Channel
POPULAR AT PATHEOS Evangelical
1

Legalism vs. Freedom vs. Lawlessness
Cranach
Books by This Author Books by Mike Bird