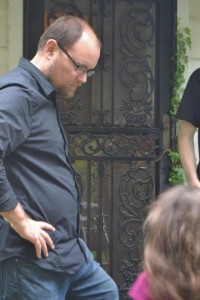 It was an awkward an email to get: my primary supervisor was leaving the school where I had only recently registered as a young doctoral student in New Testament. There are several possible steps; muddle through with a departed supervisor; change schools; or stay at the school and try a new supervisor.

The college authorities reported that they were acquiring a new Australian who “looks quite promising.” So with legendary Prof I Howard Marshall remaining on as my second supervisor, I decided to give the Australian a try, not least because this was Howard’s recommendation.

Little did I know how God would use this Aussie to bless me.

I thought I’d share a bit with Michael’s audience what it was like to have Michael as a doctoral supervisor, by describing something of the general approach (as opposed to specific techniques or skills) I learned from him.

I cannot claim that I learned these things well, or that I am an ideal student to have in one’s academic lineage. PhD stands for “doctor of philosophy” but frankly “dentist of philosophy” might be more accurate in my case. But in any event I was blessed to learn these things that were explicitly or implicitly taught by Michael.

*DON’T separate academic and personal commitment to Jesus. Michael is a terrific dad who teaches his kids the Scriptures and doesn’t ignore the local church. He once tried to get several publishers to bite on some devotional material he produced. I also saw Michael keep short accounts and protect reputations by not sharing every dirty sordid detail of various events. Michael also shares with Howard a unique blend of openness to new ideas without thereby being easily moved off of older positions, particularly when Christian faithfulness might be at stake.

* MASTER your content; being a GENERALIST, a category I learned about from Michael and something to which I still aspire, does not mean slagging off, nor does it mean ignoring one’s responsibility to become a specialist (a requirement for entering the guild). Michael, like Howard Marshall, put stress on “making the primary sources your mistress” (IHM’s phrase).

One day while we were walking together up a Scottish hill to the Birdhouse from school, I asked Michael a question on a topic that was off the beaten scholarly path and he rattled off a fairly polished, organized, concise Anchor Bible Dictionary-quality answer.

* MARRY A GREAT WOMAN AND HAVE FOUR CHILDREN. This has worked out quite well for both of us. I also learned the beauty of generosity and hospitality as Mike and Naomi kindly hosted me on a number of trips to Scotland.

* STAY CURIOUS. Michael writes a great deal on “current” issues, because they strike his interest and there is always a need for a lively scholarly voice. His curiosity has led him to a new field and keeps sucking him back into conversations on topics or entire fields such as the historical Jesus or Pauline studies that one might otherwise suspect would be tired and worn. I’ve learned from Michael that curious people always have a knack for finding (almost) everything interesting and worth pondering. As my mother-in-law used to say, if you’re bored you’re probably being boring—and no one could ever convict Michael of being boring.

* KNOW YOUR PERSONALITY, primarily so that you can be comfortable in your own skin with your own limits and tendencies. Not everyone will take a fancy to you, but you’ll probably enjoy life and work more.

* PUBLISH:  Or to rephrase that: publish, lecture, publish, give papers, and then publish some more. Not because you’ll perish if you don’t, but because you learn more about yourself, the topics you tackle, and the field by indulging that curiosity . . .  More emphasis is placed on publishing in the British (and Australian) doctoral systems than in the American system, so (like Michael himself) I wound up with a number of publications on a variety of topics before finishing my doctorate. I was prepared pretty well for my doctoral viva but having an article published in, say, JBL gives one that much more confidence when facing the bar of judgment. In some vocations it seems to be true that one’s background determines how far one can go, but usually academia and its satellite spheres like publishing are eventually a meritocracy. Even an Australian Rambo can make it.

* ENGAGE:  There’s not a lot of time to be self-conscious. You are going to make mistakes and miss important points. If necessary you can change your mind or apologize later—and there is no shame in doing so, and anyway mistakes help to kill pride—but you’ll learn more if you go wrestle and push and prod and figure out what’s true.

* Finally, perhaps most importantly, I learned I AM NOT MICHAEL F. BIRD. And I don’t have to be, thank God. I don’t have to die my hair red, master automatic weapons, master the field of New Testament studies only to move on to systematic theology, or write a book (or four) annually because I am a genius who can write without revision. But I can follow Mike’s example—making main things the main thing, focusing on the gospel and on a gospel-shaped life, and practicing scholarship in the service of God and his church.