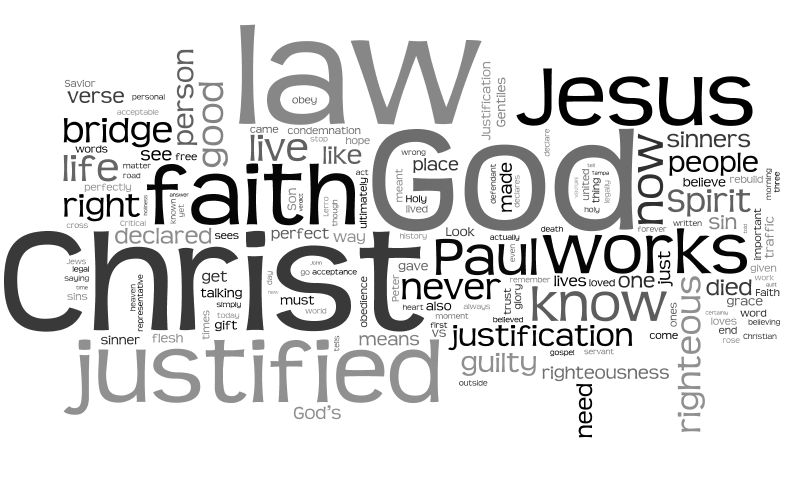 In the latest issue of the Australian Church Record (a Sydney Anglican on-line magazine, normally an informative and encouraging read) is one of the oddest articles I’ve ever read. It is by Matt Olliffe on “Has Protestantism Gone Catholic?” which you can read here (p. 6).

Olliffe proceeds to tersely define what the Protestant doctrine of justification is really about, opine its denial by leading evangelical scholars, and then accuses them all of being closet Catholics.

The support for this argument is tabulated  list of quotations from Calvin, Trent, and recent Pauline scholars. I have to warn you the list of evangelical scholars who have gone Catholic on justification is truly staggering, it includes:

Oh what dark days we are living in, when we learn that the once glorious triumvirate of evangelical Pauline scholars of the likes of Schreiner, Moo, and Seifrid, have soiled their souls by selling out to the Papal monster himself! The days are evil my friends, the days are truly evil! (Note I’m writing this with an ironic smile on my face).

First, cherry picking quotes from Calvin, Trent, and leading Pauline scholars and listing them in a series of dot points is not an argument. What Olliffe has produced is just a compilation of raw data, stripped from its context, placed in a rather tedious juxtaposition, and forced onto a procrustean bed of the author’s theological hobby horse. A list of quotations does not an argument make.

Second, the underlying assumption gleamed from both the editorial and rehearsed in Olliffe’s piece is that faith is nothing more than passive assent just does not stand up to lexical, exegetical, or theological scrutiny. Its a view that could not survive an encounter with John 5:29, Rom 1:5, Phil 2:12, Gal 5:6, and Jas 2:14-26.

Third, is it really true to say that in the Reformed tradition, “All works, whether ceremonial or moral, including the acts and attitude of Christian love, which are  the fruit of faith, were excluded from the believer’s initial, ongoing, and final justification.” I’ll be honest the answer a solid, “no.” The Reformed tradition, at least following the magisterial Reformers, has a lot more diversity on this area. A reading of Zwingli, Bucer, and Bullinger will produce a concerto of common themes on justification, but also a number of differences both subtle and seismic about the place of works and the believer at the final judgment. I whole heartedly recommend a read of James R. Payton’s Getting the Reformation Wrong, chapter 5 on “What the Reformers Meant by Sola Fide” to show the diversity in the Reformed tradition on this point. Consider also the Belgic Confession : “[W]e are indebted to God for the good works we do, and not he to us, since it is he who ‘works in us both to will and do according to his good pleasure’ [Phil 2:12]” and note also the Tetrapolitan Confession: “But since they who are the children of God are led by the Spirit of God, rather than that they act themselves (Rom 8:14), and ‘of him, and through him, and to him, are all things’ (Rom 11:36), whatsoever things we do well and holily are to be ascribed to none other than to this one only Spirit, the Giver of all virtues. However it be, he does not compel us, but leads us, being willing, working in us to both will and to do (Phil 2:12). Hence Augustine writes wisely that God rewards his own works in us. By this we are so far from rejecting good works that we utterly deny that anyone can be saved unless by Christ’s Spirit he be brought thus far, that there be in him no lack of good works, for which God has created in him.”

Fourth, may I emphasize that the Reformed tradition is not Calvin alone. And in any case, Calvin had more to say on this topic and much of it seems to grate against Olliffe’s contention. I don’t want to get into a cherry picking war over Calvin, but I came across this quotation from Calvin via Roy Ciampa on FB: “Therefore, if it be asked, What is the first cause which gives the saints free access to the kingdom of God, and a firm and permanent footing in it? the answer is easy. The Lord in his mercy once adopted and ever defends them. But if the question relates to the manner, we must descend to regeneration, and the fruits of it, as enumerated in the fifteenth Psalm.”

Fifth, my own view, is that we are not justified by works, but neither are we justified without them (Calvin). Good works demonstrate the integrity of the faith we profess (Morris). Or as I’ve argued in Justification: Five Views:

The basis for our being right with God is faith in Christ Jesus who was handed over for our sins and raised for our justification. Yet we must integrate into that picture the new covenant reality of the indwelling of the Spirit, the organic unity of faith-faithfulness-obedience, the transforming power of union with Christ, and God’s continuing work in the life of the confessing community … As I see it, God the Father, in Christ Jesus, and by the Holy Spirit, works his works in us so that we might be blameless and praiseworthy at the final judgment. On that day, God’s verdict for us at the cross and resurrection will have parity with God’s work in us from the Spirit-driven life of faith.

I’m am concerned and confused that the editors of the ACR would allow such a poorly argued and pejorative piece to make it to the top deck. Goodness me, when you reach the point that you are ragging on Moo, Schreiner, and Seifrid as Catholic sympathizers (esp. Seifrid who is more Lutheran than Luther himself!!!), then you’ve got a credibility problem. I’m worried that in Sydney Anglican circles there is developing something analogous to the hyper-Dispensational position of the “Free Grace” school about “faith” and “works.”

October 13, 2014
More on Paul's Priestly Service in the Gospel
Next Post

October 15, 2014 Cliff Kvidahl Interviews Wayne Coppins about German and English Biblical Scholarship
Recent Comments
0 | Leave a Comment
Browse Our Archives
get the latest from
Euangelion
Sign up for our newsletter
POPULAR AT PATHEOS Evangelical
1