Wine, Halloween, and What I Learned About Romans 14 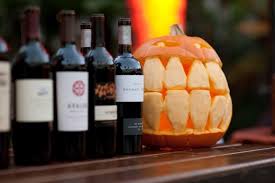 I’ve just finished my Romans commentary for the SGBC series. Had lots of fun, learned a bunch, and it made me think a heap about application in places like Romans 14. FYI, should be out Jan 2016, so don’t wait up for it!

So it is Halloween right and I’m sitting here drinking some wine, and it’s got me thinking about the “strong” and the “weak” in relation to disputable matters as discussed in Romans 14.

Important thing to know is that “weak” does not mean inferior or deficient, it means to have an overly sensitive conscience about something that other people are not bothered by.

I can give you instances where I would be considered a “strong” believer and where I might be a considered a “weak” believer. To begin with, I enjoy a nice glass of wine with my meal, steak, pasta, or even crackers with cheese. Or a cold and frosty beer on a summer’s day is also very refreshing (but I hate hoppy beer!). Let me add that I was raised in a home with alcohol abuse and I even engaged in binge drinking while I was a young man in the army. So I know quite well the perils of alcohol consumption. Even so, I do not see any complete biblical ban against alcohol. So I’m a “strong” believer in that my convictions incline me towards the freedom to drink responsibly. Now I have some friends who, for many reasons, choose not to drink, they can be a bit touchy on the subject, so I try to do the Rom 14:19 thing by not drinking in front of them or discussing fine wines in their presence.

On the other hand, I am not always one of the strong, since my teetotaling  friends also put on a great Halloween party. They dress up in funny costumes with make-up, drink tropical punch, play games, and eat lots of candy. Personally this weirds me out because I’ve always regarded Halloween as a pagan festival, macabre, dark, and even a tad demonic. I don’t let my kids go trick or treating because we worship Jesus not Voldemort and I refuse to dress up as a pale pimply vampire who likes to talk about his feelings. Why would a good Christian even want to celebrate Halloween? It baffles me! But deep down, I know my friends are not worshipping demons, it’s just costumes and candy. But for me, it’s the vibe of the whole thing, it sends my spiritual radar crazy. I know that on this topic that I’m in the minority and it’s a minor issue so I don’t judge them for it. So here I’m a “weak” believer somewhat sensitive to Halloween celebrations.

What issues are you among the “strong” and what are you “weak” on and how do you treat others who differ from you on these things?

November 1, 2014 Review of Gospel of the Lord by Mike Skinner
Recent Comments
0 | Leave a Comment
"nice"
test Christ as “Firstborn”
"Excellent commentary!"
the old scribe Christ as “Firstborn”
"Seriously? People actually spend time on this sort of claptrap? And get paid for it? ..."
Gerald Arcuri A New Look at Paul, Masculinity, ..."
"Jesus changed me and transformed my life, praise God."
Carlos Santiago On Jesus Christ as Jesus THE ..."
Browse Our Archives
get the latest from
Euangelion
Sign up for our newsletter
POPULAR AT PATHEOS Evangelical
1