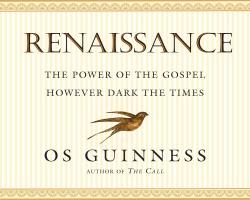 Os Guinness
Renaissance: The Power of the Gospel However Dark the Times

Os Guinness has been a prophet for God’s people for more than 30 years. This book reminds me of The Global Public Square meets The Calling. It is a critique of our culture, and also a wake-up call for the church. In some ways the material is arranged around an old idea: An Evangelical Manifesto, which was partly drafted by Guinness and published in Washington, DC, in May 2008.

While some of the material is not new, it does receive the usual Guinness treatment: pithy quotes, a sharp critique of western culture and a rousing tone.

He then goes on to show in the subsequent 170 pages that the present dark times for Christianity are over-represented by the media:

Jesus of Nazareth has the greatest number of followers of any religion on planet Earth, the church is the most diverse community on the earth, the Bible is the most translated [and popular] book in human history, churches are the most numerous social service agencies across the world, and in many parts of the world the Christian faith is the fastest growing (and most persecuted) faith — and growing through conversion rather than simply through the birth rate.

Guinness does not shy away from the problems of the western church:

[A] church befuddled over the difference between success and faithfulness, hesitant to buck the going trends, fearful to stick her neck out and find herself in the minority, and reluctant to risk the loneliness of pursuing the true and the excellent regardless of the outcomes — in short, a church fatally weakened because [it has become] worldly.

What is the answer to the church’s ills? Trusting God the Father as sovereign, Jesus as the perfect example, and the Holy Spirit as the empowering advocate for truth.

At this point I recalled Eugene Peterson’s definition of church as “the core element in the strategy of the Holy Spirit for providing human witness and physical presence to the Jesus-inaugurated kingdom of God in this world. It is not that kingdom complete, but it is a witness to that kingdom.” (Practise Resurrection)

Guinness complains that there are many who call themselves Christians, but not many who look like Jesus Christ. Our churches resemble too much our surrounding culture. He calls on the followers of Jesus to live out the Gospel in the world, “an expression of the character and shape of its truth”, and claims this will re-shape our culture, just as the Gospel has done in the past.

He calls for a three-fold response: committed engagement with the world, cultural discernment to retain the Gospel’s distinctiveness, and courageous refusal to conform or compromise Gospel truth. He calls us not merely to be present in the world, but to be active in the ways Jesus was: “he taught extensively, he healed countless people, he drove out money changers, he raised people from the dead, he confronted hypocrisy”.

He warns against utopian ideals: “The world is not ours to manage or save. Our task is to focus on our individual callings in engaging with the world, to trust that others are following theirs too, and to leave to God the masterminding of the grand outcome.”

For the church, he warns that the greatest threat of secularisation, is from within! Two other sins closely follow, corruption and division. Guinness believes that the evangelical church is at the point of needing reformation as much as the catholic church did in the 1500’s. His biblical theme is Ezekiel 37’s dry bones, which he sees as once again applying to God’s people. “With the glory of the resurrection at the centre of our faith, and the long story of the church’s decline and renewal behind us, it is no cliché but a conviction that the darkest hour is just before the dawn.”

So Guinness looks forward to the time when civilisation will realise its need for religious foundations, as predicted by historian Christopher Dawson: “We are only just beginning to understand how intimately and profoundly the vitality of a society is bound up with its religion… A society which has lost its religion becomes sooner or later a society which has lots its culture.” But the church needs to be ready to speak and live out the solution: the Gospel.

This is an encouraging read and a helpful corrective to a pessimistic view of the future often presented by liberal evangelicals, contrasted with the triumphalism of fundamentalists. At all times Guinness reminds us of our need to trust God, look to Jesus’ example, and be empowered by the Spirit and the Word.

KARA MARTIN is the Associate Dean of the Marketplace Institute, Ridley College, Melbourne, and is an avid reader and book group attendee. Kara does book reviews for Eternity Magazine.

December 5, 2014 Latest Issue of Themelios
Recent Comments
0 | Leave a Comment
Browse Our Archives
get the latest updates from
Euangelion
and the Patheos
Evangelical
Channel
POPULAR AT PATHEOS Evangelical
1

Do "Rights" Limit or Empower the...
Cranach
Books by This Author Books by Mike Bird