Guide to the Lament Psalms

What is your best guide to reclaiming biblical Lament for the church? I’ve been doing a good bit of work on biblical Lament in recent months. I have two publications, which are substantially the same, that will be coming out later next year called “Following the “Man of Sorrows” – Jesus’ Path toward Openheartedness for Survivors of Sexual Trauma: A Reflection on Embodiment and the Practice of Lament” (ch. in a forthcoming Moody Press book edited by Andrew Schmutzer) and “Following the “Man of Sorrows” – Discipleship of the Openhearted: A Reflection on Embodiment and the Practice Lament” (Bulletin of Ecclesial Theology).

So, needless to say, I was excited to see on the tables in the Eerdmans book stall at SBL back in November the new book by no less than Bruce K. Waltke along with James M. Houston and Erika Moore The Psalms as Christian Lament. Michael posted about the book just this past week in fact.

But I must say I was mystified by their excessive and over-the-top and baseless critique of Walter Bruggemann’s work on the Lament Psalms, who himself has just published another book on the Psalms this year with Brent A. Strawn From Whom No Secrets Are Hid: Introducing the Psalms. It is in many cases a rehearsal of his nearly work. So while there’s not much new here, for those uninitiated into Bruggemann’s writings on the Psalms of Lament, this is a great place to start.

Under the heading “Lament in a Post-Critical Culture” the authors of The Psalms as the Christian’s Lament come out swinging hard at Brueggmann and “his students” who they think have spoken “blasphemy” with their interpretation of the Lament Psalms. Apparently anthorpological insights from the likes of Kieregaard, Freud and Ricoeur, to name a few, somehow pervert the message of the Psalms rather than disclose it. Reference is specifically made to Brueggmann’s dependence on Ricoeur for the structure of the Psalms being a movement from orientation to disorientation to re-orientation. For Waltke and the lot this is nothing short of a “revolt against biblical orthodoxy”. And a “tool of subversion to destroy covenantal faith between God and humankind” (4).

I  find this critique not only unwarranted, but also mean spirited and lacking in Christian charity. What’s more its just wrong! First, Bruggemann’s dependence on philosophy and psychology has opened an insight into the power and relevance of Lament in a culture that does little Lamenting, but desperately needs to. There is nothing unorthodox about the true observations found in sources no matter their context or deficiencies. What kind of model of wisdom are Waltke the others using that prohibits a thick reading of biblical texts in light of resources in the humanities and sciences? 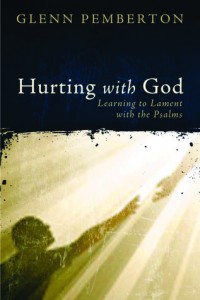 Second, they in fact do not show how Brueggmann’s readings of the Lament Psalms are unorthodox or have destroyed the concept of covenant relationship. They only vaguely speak of Bruggemann’s view that the Lament Psalms, addressed as they are to God, bring forth a demand that he live up to his side of the covenant relationship. How exactly that is turned into an attempt to destroy the covenant is bizarre since it seems very much based on the covenant and God’s hesed. The critique is the worst kind of baseless grenade lobbing effort I’ve seen in a long time.

Having read this section, brief as it was, made me little interested in whatever else they may have to say.

I would point you away from The Psalms as Christian Lament to a far better book on the importance of Lament for Christian worship: Glenn Pemberton’s Hurting with God: Learning to Lament with the Psalms. It is rich and personally connected both in exegetical insight and in pastoral application.