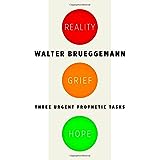 Walter Brueggemann’s recent book, Reality, Grief, Hope, draws a parallel between the fall of Jerusalem in 587BC and the disaster of 9/11 when terrorists destroyed the towers of the World Trade Center in New York City, and attacked the Pentagon. In each case, the self-understanding of the nation was called into question, including assumptions of exceptionalism, entitlement and privilege. In the US, argues Brueggemann, ‘new waves of vulnerability’ have produced a theological crisis, leading to denial that the ideology of exceptionalism has failed, or despair when this reality is faced. He charts the engagement of Jeremiah, Lamentations, and Second Isaiah with the crisis of 587 BC, noting that they posit an alternative narrative and an invitation to replace ideology with reality, denial with grief, and despair with hope. The book then considers the value for Americans today of these moves of the ancient prophets.

Brueggemann is widely acclaimed as a passionate, timely prophetic voice who engages with contemporary politics and philosophy and speaks out on behalf of the marginalised and oppressed. He has been writing on Old Testament theology for over 50 years, and has published more than 58 books and hundreds of articles.

The totalising metanarrative of empire is ‘parsimonious for those not at the top of the pyramid’ …  ‘inhospitable to those who are not achievers and performers in service of empire, and… impatiently unforgiving of those who do not measure up to the requirements of empire’(RGH, 151). This metanarrative was lived by the Jerusalem elite in the time of the prophets, says Brueggemann, and it is the metanarrative of the American establishment today. Brueggemann contends that obedient action begins in obedient imagination. The prophets were able to imagine a new world, and this formed the basis of their proposals for a new way of living.

The alternative metanarrative is ‘the particularizing narrative of the neighbourhood’ (RGH, 142). This narrative is characterised by ‘face-to-face generosity, by daily hospitality, and by incredible forgiveness’ (RGH, 151). Brueggemann rightly notes that these two narratives are incompatible, as the gospel story cannot fit within any other metanarrative as it is too large to do so (RGH, 154, quoting Robert Jenson). Brueggemann calls the church to two tasks. We are to live out of the narrative of the neighbourhood, with its recognition of individuals, and care for the poor and oppressed. We are also to speak out against the totalising narrative of the establishment. Brueggemann notes that Christians may be good at the first task, but often reluctant to attempt the critique required in the second (RGH, 164). However, imagining a new way of living and challenging to the unjust social order are required along with efforts at social activism.

Countries which do not share the US culture of entitlement and exceptionalism may see Brueggemann’s critique of empire from a different angle. Small countries such as Australia and New Zealand, because of their different histories, may need to hear the words of the prophets to their own situation. A view ‘from below’ of Christians living in the Global South would also perhaps evoke some different challenges. Walter Moberly notes in his recent Old Testament Theology, that God chose Israel when it was small and weak (Moberly, OTT 42, 51).The dangers of the sense of chosenness in reference to America’s establishment may not be dangers for those who are weak and oppressed.

In the OT, the David narrative is eventually subsumed as part of the totalising metanarrative of empire by the Jerusalem establishment, and the kings at the time of the writing prophets generally deserved the strictures of the prophets (RGR, 15). Brueggemann leaves open the question of whether the ideology of the Davidic tradition is simply a framing narrative (Ricoeur) or whether it is a sustained act of false consciousness (Marx).

The process of accepting reality, grieving, and learning to hope is compatible with the data on ‘grief work’ from Granger Westberg and Elisabeth Kübler-Ross (RGH, 157). It also fits Brueggemann’s paradigm for the Psalms of orientation (denial), disorientation (grief), and reorientation (hope).

Reality, Grief, Hope is clear and incisive, offering a way forward for Christians who are trapped in a cycle of consumerism, ‘one dimensional religion’ that lacks a critical edge, and political monologue that eliminates all other voices (RGH, 132). The invitation to face reality, to lament and to dream a new dream is a process valuable for all who wish to ‘switch narratives’. The church is invited to join the prophetic announcement of these tasks.

January 5, 2015 Book Notice: John Goldingay on Theology of Isaiah
Recent Comments
0 | Leave a Comment
"nice"
Marty Christ as “Firstborn”
"Excellent commentary!"
the old scribe Christ as “Firstborn”
"Seriously? People actually spend time on this sort of claptrap? And get paid for it? ..."
Gerald Arcuri A New Look at Paul, Masculinity, ..."
"Jesus changed me and transformed my life, praise God."
Carlos Santiago On Jesus Christ as Jesus THE ..."
Browse Our Archives
get the latest from
Euangelion
Sign up for our newsletter
POPULAR AT PATHEOS Evangelical
1

7 Common Christian Beliefs That Aren’t...
The Evangelical Pulpit
Books by This Author Books by Mike Bird