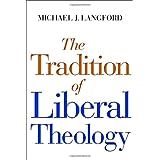 In this book, Michael Langford aims to give a presentation of liberal theology. What he means by “liberal theology” is a form of Christian theology that accepts the statements of the Apostles’ Creed but with a certain degree of latitude so that there is a balance between religious faith and human rationality. Interesting is that Langford rejects religious feeling as a basis for theology (i.e., Schleiermacher) and approaches rooted in cultural-linguistics (i.e., George Lindbeck). Langford is very much into religion within the limits of reason. But therein lies the problem because, as Langford admits, it then becomes a question of “whose rationality?” Langford assumes a kind of universal rationality upon which religious ideas can be adjudicated. The problem is that many will appeal to rationality as the reason for embracing a scientific materialism, a view which Langford rejects. What is considered rational is not neutral or independent of cultural presuppositions. I think Langford fails to recognize that what drives much of liberal theology is not so much rationality, but culture, the attempt to make Christianity palatable to the reigning cultural zeitgeist. That is why I’ve often thought of liberal theology as theological form of “Stockholm syndrome,” where liberal theologians identify with the values of their cultural captors in order to survive under adversity or strive to impress their contemporaries.

A Use of the Bible that Is Not Always Literal.
Reason and Revelation in Harmony.
A Nonlegalistic Account of Redemption.
The Possibility of Salvation Outside a Narrow Path.
Toleration.
Original Sin, But Not Original Guilt.
Belief in Free Will.
A view of Providence That Respects the Integrity of the Natural Order.
The Joint Need of Faith and Works.
A Minimal Number of Basic Teachings.
A Range of Acceptable Lifestyles.

He also gives a brief exploration of eminent liberal theologians including Justin Martyr, Origen, Elizabeth I, Richard Hooker, Joseph Lightfoot, and others. There is also a contrast of liberal theology with Protestant Fundamentalism, Roman Catholicism, Dialectic Theology (the worst foe of liberal theology he says!), and scientific materialism.

The term “liberal” gets used so elastically that it is almost meaningless. For instance, I’ve been called a fundamentalist and a liberal by folks of different ilks. To be honest, I have no real affection for liberal theology, for the reasons that Thomas Oden gives in his book Requiem. I much prefer a broad evangelicalism to a ideologically vacuous you-bring-it-I’ll-bless-it type of liberalism. However, I did find this volume to be an enjoyable book about a theologian who is striving to be a liberal theologian in fidelity to the essence of the apostolic faith. Ultimately, I do not share Langford’s position, but it did not stop me from appreciating elements of his book, and learning what makes some liberal theologians tick.

February 7, 2015
John Dickson's Doubter's Guide to the Bible
Next Post