Book Notice: The Text of the OT 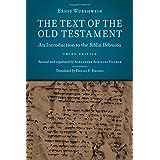 Ernst Würthwein
The Text of the Old Testament: An Introduction to the Biblia Hebraica. 3rd Edition.
Revised and expanded by Alexander Achilles Fischer. Translated by Erroll F. Rhodes.

Würthwein’s classic Der Text des Alten Testaments was first published in 1952, and the fifth German edition was in 1988. Professor Würthwein died in 1996, and Professor Alexander Achilles Fischer undertook a complete rewriting of the text in 2009, to account for the latest scholarship. Publication of texts from Qumran, an edition of the Antiochene text of Samuel, Kings and Chronicles, and further volumes of the Göttingen Septuagint required an updating of the volume, as well as progress in Biblia Hebraica Quinta. Translated by Erroll F. Rhodes, the first English translation was in 1980, followed by a second edition in 1995, and this third English edition in 2014.

The basic outline of the book has been retained, with a new chapter on the texts from Qumran. Each chapter has a bibliography of selected works. Würthwein’s plates have mostly been retained, though some have been replaced with newer photographs, and the descriptions have been updated.

The book considers both the Hebrew text and ancient translations. The first chapter covers the development of the Hebrew script, writing materials, and the scroll and the codex. Subsequent chapters consider the Masoretic Text, the Qumran scrolls, and the Samaritan text. The Septuagint receives thorough treatment, followed by an introduction to the Targums, the Peshitta, Vulgate, Old Latin fragments, and other translations such as the Coptic. Fischer notes that since the discovery of the Dead Sea Scrolls, the significance of the translations for textual criticism is diminished (page 148).

The final section considers the goal, task and method of textual criticism. The various sources of textual variants such as scribal errors and intentional alterations are explained. Practical help is given with reading the apparatus of Biblia Hebraica Stuttgartensia, and text-critical examples are given. The Masoretic text should be weighed along with other witnesses to the text (page 190). Variants should be subjected to careful linguistic examination, followed by an analysis of their context. Back-translation of phrases requires attention to characteristic translation techniques of the source text, and generally requires specialist knowledge (page 192). Three principles can be applied, but they are only to be used as supplemental aids to the text-critical decision: (a) a corrupt or altered reading should be corrected, (b) the more difficult reading is the more probable, and (c) the shorter reading is preferable (pages 193-4).

The volume ends with 48 black-and-white plates of texts and inscriptions beginning with the earliest evidence for the existence of the Davidic dynasty in the Tell Dan inscription (ca. 825 B.C.E.), found in 1993 in the rubble of an 8th century fortification. Other plates show the Mesha Stele, the Siloam inscription, a Lachish letter, parts of the Elephantine and Nash papyri as well as Qumran scrolls and mediaeval documents showing different pointing systems from Babylon and Palestine. Greek, Syriac, Latin, Ethiopic and Arabic documents are also included. The end matter includes a bibliography, glossary of terms, and index of Biblical citations.

The Text of the Old Testament is an excellent introduction for beginners. The information about the texts and their transmission gives a helpful context for the explanation of text-critical methodology. The book is clearly written, and a pleasure to read. It can be enthusiastically recommended to students and will be a valuable addition to seminary libraries. I look forward to using it with my students.