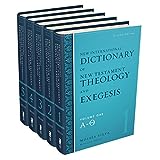 When this behemoth landed on my doorstop I was little more excited than when I get most book packages. The  NIDNTTE is a terrific reference source for Greek words and their meanings. To give the story of the book: Lothar Coenen et al edited the Theologisches Begriffslexikon zum Neuen Testament which had been produced by German academics, then an English edition was commissioned under the editorship of Colin Brown, who over saw the translation, revision, and adding of new articles – including folks like a young D.A. Carson – and it published as the NIDNTT. Moises Silva, a Paul scholar with expertise in linguistics, was uniquely suited to edit the revision of the new edition and I think he’s done a pretty good job.

On the revision side of things, some are cosmetic, like using the NIV 2011 instead of the NRSV in general. A greater uniformity has been brought to the material as well in terms of both length and arrangement of articles. When the NIDNTT was first translated Rudolf Bultmann’s influence was still in ascendancy, however, that is no longer the case, so the articles are no longer haunted by Bultmannmania. Several articles have been re-written and others news composed. While the NIDNTT tried to get around the word-study fallacy of the TDNT by grouping words by conceptual relatedness, the volume never really got around the need for addressing semantic domains rather than just concepts. Thankfully the NIDNTTE attempts, however fallibly, to relate words by semantic domain – much like Louw & Nida – resulting in: (1) Providing a comprehensive list of cognate and related words to the word being studies and listing the underlying concept it is associated with in English; (2) Giving attention to discussion in each article of the semantic relationships between the word group being discussed; and (3) There is a genuine attempt to separate linguistic and conceptual data so as not to superimpose theological meanings onto words, while recognizing that some words like “justification” and “flesh” have developed specific meanings in theological discourse. While the execution of this approach might not satisfy every Greek Lexicographer, I like to think that it is a step in the right direction.

When it comes to the structure of articles, a survey is given of General Greek usage (informed mainly by LSJ and TLG), Greek and Semitic Usage in Greek writings (e.g., LXX), and then NT usage.

I had a good read through this book, looking up articles on dikaiosyne, pistis, and Christos. There was one of two things I might have haggled over, but for the most part, a very elegant and useful volume. I used it as a main source to write some theological entries for a Bible dictionary and it pointed me at the primary sources to look at. Definitely worth owning, either hard copy, or part of your Bible Software package.