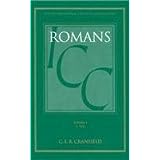 I just heard via the BNTC FB page the sad news that Charles E. B. Cranfield passed away.

Cranfield will be best remembered for his two volume ICC commentary on Romans published in 1975-79. While some of you young whipper-snappers might not remember, once upon a time the only substantial Romans commentaries around in English were by Dodd, Barrett, Lenski, Kasemann, Bruce, and Cranfield. If you did Greek exegesis courses on Romans between 1975-1995, then odds are that your go to book was Cranfield.

Having just finished writing my own Romans commentary for the SGBC, I can honestly say that I immensely enjoyed re-reading over Cranfield. His exegesis was always sensible and reasoned, he always gave a  judicious evaluation of exegetical options, had a cute Barthian tinge, and often a wonderful way with words. Since I am lecturing this afternoon on Rom 3:21-26, here is Cranfield’s introduction to the section:

This short section is … the centre and heart of the main division to which it belongs. We may go farther and say taht it is the centre and heart of the whole of Rom 1.16b-15.13. It stands out by reason of the distinctiveness of its style: it reads like a solemn proclamation … It stands out much more of course by virtue of its content; for it proclaims the fact that the one decisive, once for all, redemptive act of God, the revelation both of the righteousness which is from God and also the wrath of God against human sin, the once for all revelation which is the basis of the continuing revelation of the righteousness (1.17) and of the wrath (1.18) of God in the preaching of the gospel, has now taken place. It shows that the heart of the gospel preached by Paul is a series of events in the past (not just the crucifixion of Christ – for the Cross by itself would have been no saving act of God – but the crucifixion together with the resurrection and exaltation of the Crucified) a series which is the Event of history, an act which as the decisive act of God is altogether effective and irreversible. It attests the fact that what we have to do with in the gift of righteousness, with which Romans is concerned, is nothing less than God’s costly forgiveness, which, whereas forgiveness on cheaper terms would have meant God’s abandonment of His faithful love for man and the annihilation of man’s real dignity as His morally accountable creature, is altogether worthy of the righteous, loving, faithful God, who does not insult or mock His creature man by pretending that his sin does not matter, but rather Himself bears the full cost of forgiving it righteously – lovingly.

You can find other reflections on Cranfield by Nijay Gupta and John Byron.