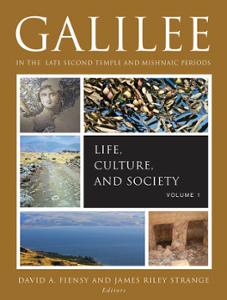 I am excited to promote this new and important book on Galilee. For anyone interested in the social world of Jesus and early Christianity, this is a go to source for an accessible, yet well-researched volume of essays on various aspects of Galilee. The chapters in the volume represent the best and most recent work done on Galilee available.

The book begins with a series of useful full color maps of Galilee and pictures illustrating its typography and archaeological remains. The book is divided up into four sections–the first acting more as an introduction than a section in the way the others do: (1) Overview of Galilean Studies [2 chs.], (2) History [6 chs.] , (3) Village life [5 chs.] and (4) Economics [6 chs.].

This book is useful for any number of different kinds of readers. For professors looking for a course textbook that will provide a thorough but accessible treatment of the world of Jesus, this book is ideal. For those doing research on Jesus, the New Testament and Early Judaism and Early Christianity, the volume can usefully contribute to an “on the ground” reading of the texts.

One particular point aspect of the importance of research on Galilee in the early centuries of the millennium is the sea change in Gospels research in both Matthew and Mark. After the long standing assumptions of an Antiochean location for Matthew, growing number of scholars prefer a Galilean location for the First Gospel – I being one of them (see also Gale and Saldarini). The editors also cite the recent work of Markan scholars who place Mark in Galilee as well (see. Marcus and Kelber – mentioned on pg. 5). So, a better knowledge of Galilee in the late first century will contribute significantly to our understanding of the message of the Gospels.

Here’s how the editors Fiensy and Strange sum up Volume 1:

Volume 1 has collected chapters on the life and culture of ancient Galilee. After surveys of the modern study of Galilee and of Galilean history, there are specialized studies on ethnicity, on religious practices of Galilee (including synagogues), on notable personalities, and on important social movements. Village life is featured in one essay on the village, followed by one on household Judaism, and then on on the village houses. This section of the volume ends with essays education and diseases and health. There follow offerings on the road system, trade, markets, the urban-rural divide, and the economic life of the village. In relation to these latter is the chapter–consisting of two companion essays–that forms a debate on the standard of living of the average villager during our time period. Were they destitute, living modestly, or prosperous? A chapter on taxation rounds out part four of volume 1.

I think this is a very useful book on Galilee for a wide variety of readers. I know my teaching and research will be helped by this work. I am leading a study tour to Israel beginning next week, and my site lectures will be strengthened with the help this volume.

May 4, 2015
How Should a Christian Think About Work?
Next Post

May 6, 2015 Gambling Addiction as Suburban Slavery
Recent Comments
0 | Leave a Comment
Browse Our Archives
get the latest from
Euangelion
Sign up for our newsletter
POPULAR AT PATHEOS Evangelical
1

Evangelical
Interview with N.T. Wright about Signposts in the...
Euangelion
TRENDING AT PATHEOS Evangelical