Engaging Josh Jipp and his Christ is King, Chapter 3: King and Praise 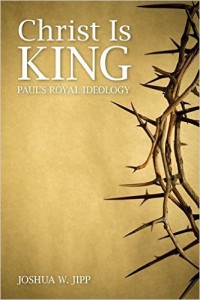 I continue my dialogue with Josh Jipp on his new book Christ Is King: Paul’s Royal Ideology. A few weeks back I began a series of posts engaging Josh’s chapters – find last post here and Josh’s response here. He has graciously agreed to respond to my posts.

We have been finding much common ground in our perspectives which is encouraging – at least from my perspective. I have been teaching Paul with a thoroughgoing Davidic foundation for a number of years without many – well any! – allies. It seems with each chapter I find greater confidence in my own understanding. This book will be an essential resource for my larger Davidic Christology project without a doubt! I think it will also inspire new conversations over old topics.

My most substantial disagreements have been light criticisms at most. It is my contention that Josh should have spent more attention on the Davidic material than the Greco-Roman. Again this is related to the question of priority not significance. Of course the Greco-Roman sources are significant. But I believe Paul’s christology is thoroughly Davidic. Let me put it like this: it is not kingship discourse in general, its Davidic kingship discourse in particular with which Paul is framing the gospel and its significance.

So far, chapter 3 is the most significant of the book. Proportionately, it is also the longest of the first three chapters. For all intents and purposes, it is an exegesis of Colossians 1: 15-20 with a brief comparative discussion of Philippians 2:6-11.

The argument of the chapter is that these so-called Christ-hymns are divine honors sang to Jesus because of his great benefactions. Josh’s argument proceeds clause by clause through the hymn in Colossians 1:15-20 highlighting and illustrating the way each corresponds with ancient widespread kingship ideology. Josh then draws the implication that Paul’s christology originates from his reflection on Jesus as a Davidic king in the context of the commonly known kingship discourses. I think this paragraph sums it up well:

In this review of chapter 3, since I largely am in agreement, I want to address the recent, friendly criticism of Crispin Fletcher-Louis over at Jesus Monotheism: The Blog. Crispin criticizes Josh for his dependence on the important work of William Horbury, which Josh readily admitted (136). The criticism is essentially that kingship ideology from the OT or from the Greco-Roman sphere cannot explain the emergence of christology. Crispin writes in his brief post:

In essence, I think Jipp overstates the role of biblical and pagan kingship texts in the formation and formulation of NT Christology. In important ways, Christ’s divine identity—as the eternal Son, the co-creator-become-incarnate-in-Jesus-of-Nazareth—is quite unlike anything that we find in OT texts describing a “divine” king. Those texts do not explain Paul’s remarkable identification of Christ with Yhwh-Kyrios

In the very brief critique Crispin makes a puzzling statement. He writes, “it is not for nothing that Paul never actually refers to Christ as a “king” (basileus).” While this may be true, it is misleading at best since Paul claims Jesus to be the “son of David” (Rom 1:3-5; 2 Tim 2:8). For Paul Jesus is Messiah King and “Christ” then is equivalent to “king”. Christos Kyrios was a term used by the author of the Psalms of Solomon to refer to the Davidic king (Pss. Sol. 17:32). One other interesting set of facts from Psalms of Solomon relates to the discussion. Commonly noted is the conspicuous absence of an interest in the temple in the text. This fact is all the more striking when one comes to 17:30-31 and glory of the messiah is synonymous with the glory of God. These verses describe the pilgrimage of the nations to Jerusalem where they see the glory of the Messiah in his work which is simultaneously the work and glory of God:

And he will purge Jerusalem and make it holy as it was even from the beginning, for the nations to come from the ends of the earth to see his [Messiah’s] glory to bring as gifts her children who had been driven out, and to see the glory of the Lord with which God has glorified her.

Furthermore, it is true, as Crispin points out in his critique, that a more comprehensive study needs to give account to the priestly messiah. He perhaps rightly states, “For Jipp ‘Messiah’ only means king. He gives no space to the evidence that for many first century Jews it meant (royal) high priest.”

This point may correspond to my own critique that the Davidic traditions need to be given greater priority in the discussion of kingship in Paul. I think in the detail of Josh’s own argument, the priority of Davidic tradition is apparent, especially in the use of royal and Davidic psalms. What’s more, if the Chronicles is given greater attention, one may find that unity of both king and priest in the Davidic identity. Thus, while Josh is correct in his assertion that assessments of christology need to take account of kingship discourse, I think it would be more accurate to say Davidic kingship discourse – but now I’ve made this point too much.

December 14, 2015
Con Campbell Responds to Criticism of his Advances in the Study of Greek
Next Post

December 20, 2015 The Glory of the Israel's Davidic King and Yahweh
Recent Comments
0 | Leave a Comment
Browse Our Archives
get the latest updates from
Euangelion
and the Patheos
Evangelical
Channel
POPULAR AT PATHEOS Evangelical
1