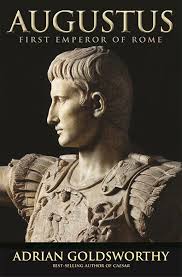 Over the Christmas and New Year’s break I began reading for pleasure, and to expand my knowledge, the recent biography on Augustus by Adrian Goldsworthy: Augustus: First Emperor of Rome. It is well written; and while Ancient historians will be in a much better position to judge Goldsworthy’s scholarship, the work open up a fresh understand of such a powerful figure. Along with Augustus there is the cast of characters surrounding his story: Julius Caesar, Mark Antony, Cleopatra, Cicero, Pompey, Agrippa, Brutus, Cassius, Drusus, Julia, Livia, Virgil and many more. Herod is also discuss a good bit the book to my great pleasure.

Among the many things that have stuck out to me perhaps one of the most significant was the manner Augustus exercised his leadership. He had a personal relational connection to the soldiers he commanded and the provinces over which he ruled. He traveled often for long periods of time visiting his provinces in the East and West to maintain the personal relationship. Also, I was surprised to learn how much family meant to him.

Today as I was reading, one particular passage stood out and caused me to reflect. Goldsworthy is discussing Imperator Caesar Augustus’ “relentless pursuit of supremacy” although always careful to preserve the “illusion” that he was protecting and sustaining a res publica. Goldsworthy’s reading of the man is fascinating:

This does not mean that his use of power was no more than a means to maintain it, since he worked very hard to use it well. There is every reason to belief that the princeps felt he deserved to win the civil wars, to gain supremacy and to hold onto it because it served the wider good – obviously as he perceived it. Thus he could really see himself as merely the first magistrate of the state, a servant rather than a ruler. Self-restraint, and the desire to live up to his own ideal, make far more sense as curbs on his behavior than the opinions of the senatorial elite (352).

Today I also read this proverb from the lips of Augustus’ life long friend and closest ally Marcus Vipsanius Agrippa:

The book is putting the Roman world of the NT into greater clarity.

January 20, 2016
The Gospel of Mark and Chalcedon
Next Post