Book Notice: Bruce Longenecker on The Cross Before Constantine 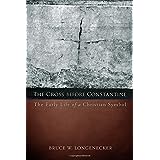 Bruce W. Longenecker
The Cross Before Constantine: The Early Life of a Christian Symbol
Minneapolis: Fortress, 2015.
Available at Amazon.com

Particularly interesting is Longenecker’s claim to have found evidence for Christian symbols in a bakery in Pompeii, which would locate Christians in the city of Pompeii prior to its destruction in AD 79 when Mt Vesuvius erupted.

Prior to Constantine, the cross was not primarily an aid to Christian worship or a feature of Christian architecture adoring centralized places of collective adoration; instead, it was often used as an all-important mark of identity in an insecure world in which evil lurked virtually everywhere. It shielded its beneficiaries in a world threatened by the constant insurgency of evil. It offered the protection of the deity who underwent death’s defeat but who rose to a victorious life over the most feared of all enemies. (pp. 187-88).

It is a fairly short read, yet almost detective-like its prosecution of a thesis, very informative, lots of pictures and diagrams, and genuinely engaging. Well worth getting!

February 23, 2016 Socialism is Evil ... Apparently?
Recent Comments
0 | Leave a Comment
Browse Our Archives
get the latest from
Euangelion
Sign up for our newsletter
POPULAR AT PATHEOS Evangelical
1

The Great Reset Is Coming!
Roger E. Olson
Books by This Author Books by Mike Bird

Evangelical
HTR articles on Wright and Israel are Free...
Euangelion

Evangelical
Jesus and the Pharisees # 2
Euangelion

Evangelical
Jesus and the Pharisees # 1
Euangelion
TRENDING AT PATHEOS Evangelical