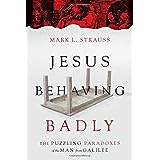 All of us, to one extent or another, read our Bibles selectively.  Feel-good passages are set against picturesque scenery as desktop backgrounds.  While challenging passages are conveniently rationalised or simply ignored.

Much the same attitude is regrettably adopted when reading the gospels.  Instead of confronting Jesus as he is presented, we prefer a Jesus of our own cultural imagination.

In Jesus Behaving Badly, Mark Strauss refocuses the cultural lens through which we see Jesus.  He displays Jesus in high definition, casting light on all the paradoxes of his character that offend our 21st century Western sensibilities.  Strauss presents the Jesus of the gospels uncensored, unedited and uncut.

From the outset, Strauss lays down the challenge: ‘Ultimately we have to decide if we are going to sit in judgment on Jesus or listen and learn from him’ (14).  Cherry-picking Jesus’ identity is simply not an option.

Readers may find each chapter peculiarly relevant to different individuals and cultures.  For example, the chapter, ‘Antifamily or Family Friendly?’ will have special resonance with Asian Christians who instinctively feel the cultural indignity of Jesus’ question: ‘Who are my mother and my brothers?’ (Mark 3:33)

In each chapter, Strauss is refreshingly honest; indeed for some, maybe too honest.  When examining Jesus’ shocking words, ‘it is not right to take the children’s bread and throw it to the dogs’ (Mark 7:27), Strauss is comically blunt: ‘Jesus, like the famous “Soup Nazi” on Seinfeld, says “No soup [bread] for you!” (129)  We are confronted with the full offence of Jesus’ rebuff.

Some readers may find Strauss uncomfortably slow to “explain away” this apparent racism.  However, that cultural discomfort is exactly what he intends for us to appreciate in full.  The key strength of this book is its brutally honest engagement with the culturally jarring facets of Jesus’ character.  This is no exercise in straw man argumentation.

According to Strauss, the key to untangling these 11 puzzling paradoxes is the kingdom of God.  This divine kingdom – ‘God’s authority and dominion, his sovereign rule over the universe’ (165) – is the interpretive key to unlocking Jesus’ mission, purpose and vision.  It is the lens through which each paradox is not only resolved but redefined.

So Jesus was indeed a revolutionary but against the true enemies of the kingdom.  He was genuinely angry but with those who opposed the kingdom’s herald.  And he was an ‘earth scorcher’ of sorts but inaugurated a kingdom of a new creation.

The book climaxes in its grand claim that Jesus is ‘the victorious King and Savior of the world’ (185).  This divine kingship was vindicated in his resurrection and is the quintessence of his multifaceted identity.

When Jesus is known as king, the puzzling paradoxes of his character fall into place.

Strauss has written a book that portrays Jesus in raw reality.  He refocuses our cultural lenses and confronts us with a Jesus we simply cannot ignore.

March 1, 2016
Answering Bart Ehrman on How Jesus Got Adopted
Next Post

March 3, 2016 Book Notice: Joy in the Journey
Recent Comments
0 | Leave a Comment
Browse Our Archives
get the latest from
Euangelion
Sign up for our newsletter
POPULAR AT PATHEOS Evangelical
1