Fred Sanders’s 18 Theses on the Father and the Son

As the Complementarian Trinity melee winds down, I refer you all to Fred Sanders’s excellent piece: 18 Theses on the Father and the Son.

I still have to reflect on analogates of the immanent Trinity in #17, I’m not so sure.

Otherwise, I have a few comments on a few of Sanders’s theses:

10. The doctrine of the Trinity suffers equally from flattening out the distinctions among the persons and from over-drawing them.

This is the point that has always made me somewhat sympathetic to Ware and Grudem. We have to remember that there is something true and fitting about the Son that makes it entirely fitting for him rather than the Father or the Spirit to become incarnate. The Godhead is not three divine monads with one randomly incarnated; but three distinct persons, co-equal and consubstantial, yet the Son is eternally the Son and relates to the Father as the Son. However, to describe his sonship as an eternally subordinated sonship runs the risk of making his will subordinate to the Father’s will and reducing the Son to a lesser authority who is not equal in might, power, and glory to the Father.

I agree. For me this verse is not indicating a hierarchy with God the Father at the top, then the Son, then men, then women at the bottom. Rather, it shows that men and women must respect their respective heads just as the Son respected the Father. 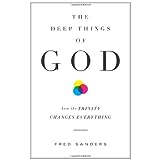 Oh, and make sure you read Fred Sanders’s excellent book, The Deep Things of God: How the Trinity Changes Everything (Wheaton, IL: Crossway, 2010).

June 15, 2016
Marks Nanos Interviewed on the Paulcast about "Paul within Judaism"
Next Post