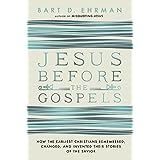 Over at The Jesus Blog, Rafael Rodriguez has finished up  his 8 part review of Bart Ehrman’s Jesus Before the Gospels: How the Earliest Christians Remembered, Changed, and Invented Their Stories of the Savior.

Probably Rodriguez’s main critique of Ehrman is that he does not really understand memory studies and their application to early Christianity. Although Ehrman  points out some interesting things about the nature of memory, and poses some carefully crafted rhetorical questions, he does not really present an accurate description of memory studies and their significance to mapping the Jesus tradition underlying the Gospels. In other words, Ehrman illustrates that a little bit of knowledge is a dangerous thing.

More problematic, in my view, is Ehrman’s dependence on sources. He reveals to his readers that, “[f]or about two years now I have spent virtually all my free time doing nothing but reading about memory” (p. 2), but his citation of memory studies seems to me rather anemic. It is difficult to get a precise measurement because there is no bibliography included in the book, but scanning the endnotes suggests that Ehrman cites a total of thirty-four sources that I would categorize as “memory studies.” The majority of these he cites only once, and on more than one occasion those citations are misleading (e.g., he cites Schwartz’s approbation of Maurice Halbwachs’s claim that memory adapts the past to “the beliefs and spiritual needs the present” [p. 7, citing Schwartz,Abraham Lincoln and the Forge of National Memory, 5] without mentioning that Schwartz also critiques Halbwachs on this very point: “Considering Lincoln’s image as a mere projection of present problems is as wrong as taking it to be a literal account of his life and character”; Schwartz, p. 6; see also my critique of Ehrman’s use of Ulrich Neisser’s study of John Dean’s testimony). Perhaps even more problematically still, Ehrman engages almost none of the New Testament scholarship concerned with memory. Unless one includes Birger Gerhardsson’s Memory and Manuscript (which does not, strictly speaking, engage “memory studies”), he only mentions Richard Bauckham’s book,Jesus and the Eyewitnesses. There’s no mention of scholars such as Chris Keith, Alan Kirk, Anthony Le Donne, Tom Thatcher, Michael Thate, or myself. (Chris Keith is mentioned in the acknowledgements, but none of his works appear in the endnotes.) When he mentions Dale Allison, Richard Horsely, or Werner Kelber, he does not address their engagement with memory studies. This is especially worrisome when Ehrman complains that New Testament scholars, as a group, have largely ignored memory studies. When Ehrman does engage media studies among New Testament scholars, he draws attention to the form critics, whose work is largely seen as out-of-date.

I should stress that not everything in Rodriguez’s review is negative, he gives credit where credit is due, but it is not a flattering review at any rate. Read the whole thing below:

June 27, 2016
Blast from the Past: The Saving Righteousness of God
Next Post

June 29, 2016 More Trinity and Gender Reflections ... This Time from Women
Recent Comments
0 | Leave a Comment
Browse Our Archives
get the latest updates from
Euangelion
and the Patheos
Evangelical
Channel
POPULAR AT PATHEOS Evangelical
1