N.T. Wright on the Day the Revolution Began 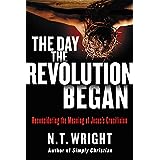 I’ve interviewed Tom Wright about his forthcoming volume The Day the Revolution Began: Reconsidering the Meaning of Jesus’ Death, which will hopefully be published with CT sometime soon, but here’s one quotation from Tom that I have to share in advance:

We have swapped our biblical heritage of new heavens and new earth for a form of Platonism (‘going to heaven’ – which you find in the first century in Plutarch, not in Paul!); we have swapped the biblical vocation of humans (to be ‘a kingdom and priests’) for a moral contract in which the most important thing is whether or not we’ve passed the moral exam, and if we haven’t what can be done about it; and we have therefore swapped the rich biblical account of what Jesus’ death achieved for a slimmed-down version which can easily be ‘heard’ to say that an angry God took out his bad temper on his own son . . . which is the sort of thing a pagan religion might say. So, as I say in the book, we have platonized our eschatology, as a result of which we have moralized our anthropology, and have therefore been in danger of paganizing our soteriology. Fortunately, the Bible itself will help us get back on track.

September 14, 2016
The Secularized Erastianism of the Daniel Andrews Government in Victoria
Next Post