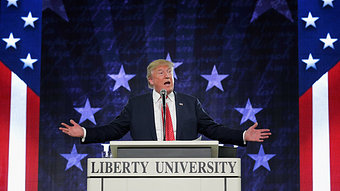 Just after the US election, I wrote a piece for a prominent Australian News Outlet called The Drum on Who are the Evangelicals Who Supported Trump? Basically trying to explain the different “types” of American evangelicals.

For what it’s worth, I think Trump has played the evangelicals. Donald Trump has no record of professing faith. Although he identifies as a religious person when it suits his audience, other times he has bragged about serial adultery, and says he’s never asked God for forgiveness. While his supporters in the religious right like to call Trump a “baby Christian,” there is no evidence of authentic Christian faith in his life.

November 13, 2016
Meet This Book: An Anomalous Jew
Next Post

November 26, 2016 Tim Wilson's CIS Lecture on Religious Freedom
Recent Comments
0 | Leave a Comment
Browse Our Archives
get the latest from
Euangelion
Sign up for our newsletter
Books by This Author Books by Mike Bird