Coming out in July 2017 from Eerdmans is: 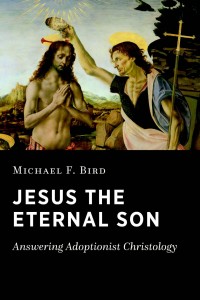 Adoptionism—the idea that Jesus is portrayed in the Bible as a human figure who was adopted as God’s son at his baptism or resurrection—has been commonly accepted in much recent scholarship as the earliest explanation of Jesus’s divine status. In this book, Michael Bird draws that view into question with a thorough examination of pre-Pauline materials, the Gospel of Mark, and patristic sources. Engaging critically with Bart Ehrman, James Dunn, and other scholars, Bird demonstrates that a full-fledged adoptionist Christology did not emerge until the late second century. As he

delves into passages often used to support the idea of an early adoptionist Christology, including Romans 1:3–4 and portions of the speeches in Acts, Bird persuasively argues that early Christology was incarnational, not adoptionist. He concludes by surveying and critiquing notable examples of adoptionism in modern theology.

December 20, 2016 Win a Free Copy of An Anomalous Jew
Recent Comments
0 | Leave a Comment
"Well if Augustus was only a god insofar as social conventions accepted him as one ..."
Neil Godfrey The Deification of the Roman Emperor
"On another blog I came across an excellent quote from CS Lewis, taken (I believe) ..."
Mike Dunster Christians and Conspiracy Theories – An ..."
"Greetings from Tennessee. Nice post, Mike. I interact with your post here. I think you've ..."
Dale Tuggy Justin Martyr on the Logos
"aidZpartner.yahoo.Com"
cbones HTR articles on Wright and Israel ..."
Browse Our Archives
get the latest from
Euangelion
Sign up for our newsletter
POPULAR AT PATHEOS Evangelical
1