Book Notice: Neither Complementarian Nor Egalitarian 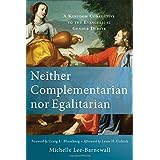 When people enter the complementarian/egalitarian debate most people are looking for an answer. Most want a definitive answer: ‘Yes, women may hold positions of authority in the church’, or ‘Yes, the man is the head of the household’. For those seeking an either/or outcome Neither Complementarian nor Egalitarian (2016) may be a disappointing read. However, for those who want to expand their thinking on gender roles in Christianity, Michelle Lee-Barnewall offers an interesting alternative. Highlighting the influence of cultural shift on the egalitarian/complementarian debate, Lee-Barnewall reframes the discussion of Biblical authority suggesting that unity and reversal are more significant ideas when considering authority in the church, as are holiness, sacrifice, and love.

While the debate has often centred around rights and individuality, Lee-Barnewall instead highlights the kingdom ethic of unity which, she suggests, is presented in Genesis in the joining of Adam and Eve, ruptured at the fall and repeated throughout the Bible. Lee-Barnewall also highlights Christ’s reversal of social roles and his sacrifice of his personal rights for the benefit of others. Michelle Lee-Barnewall is inviting all Christians to look at the Scriptures and the notion of authority drawn from the ‘head/body’ metaphor in their historical context, and then to consider them in light of Christs’ teaching and example. Ideas presented in Neither Complementarian nor Egalitarian, such as sacrificial love and servant leadership, are not new concepts in the church yet this book makes me wonder whether, despite Christ’s example, we haven’t yet managed to separate our understanding of authority from the socially expected connection to worldly recognition and honour. In this book Lee-Barnewall encourages her readers to reconsider their expectations.

It is impressive and encouraging that Michelle Lee-Barnewall has managed to present a discussion which is solidly scriptural but also, as she states, neither complementarian nor egalitarian. It is impressive for the discussion is so often emotionally charged, yet this book is written without criticism or vehemence. And it is encouraging to see a perspective that looks to Christ and his sovereignty rather than fighting to establish personal rights. In Christ there is no male or female, slave or free. Instead there are redeemed people empowered and united by the Spirit to bear witness to the grace of God as a community. Without dismissing the need to continue the discussions around gender and authority in the church, Michelle Lee-Barnewall has contributed rich new material for discussion, making this book a valuable resource for anybody thinking about church structure, authority or gender roles in ministry.

January 19, 2017 Review of God and the Faithfulness of Paul
Recent Comments
0 | Leave a Comment
"Think of it as a subject being viewed by a different perspective."
theresa perry Forthcoming Books by Black Biblical Scholars
"so, Dr Bird I have three of your books and will likely make this my ..."
eric r Endorsements for the Second Edition of ..."
"MalissaHmmm? I think I like it when you write...“I think "worker" might be a good ..."
A Amos Love N.T. Wright: The New Testament Is ..."
"Balanced and tolerant perspectives concerning eschatology are needed to counter the wild speculation associated with ..."
the old scribe The Gospel and Eschatology!
Browse Our Archives
get the latest from
Euangelion
Sign up for our newsletter
POPULAR AT PATHEOS Evangelical
1