Book Review: Stanley Hauerwas on The Work of Theology 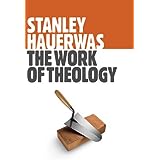 The latest offering from retired Duke professor Stanley Hauerwas, The Work of Theology, perhaps unintentionally verifies his conviction that “the work of theology is never done” (p. 265). With his characteristic mélange of Aristotelianism, Wittgensteinianism, and (Alasdair) MacIntyreism, this is an apologia of Hauerwas’ life’s work, further expounding his thought while also responding to misunderstandings of it. The opening chapter’s thesis, paradigmatic for the volume, is that Hauerwas views theological work as an “exercise in practical reason” (p. 4). This is signaled in the “how” fronting each chapter’s title, which could otherwise convey that the book is something of a do-it-yourself manual. Yet Hauerwas wants readers to grasp not only that theology so defined is indivisible from ethics, but that the good work of theology “attracts others to join you” (p. 9). In short, his apologia is not only defense but invitation.

Even more than in Hauerwas’ other works, the first-person singular pronoun dominates this book. While upon first glance this may suggest Hauerwas’ thought is largely autobiographical, it is instead intended to uphold the MacIntyrean significance of “who people are” along with “how they understand themselves” (p. 14) when making claims about the good and true. Rather than generating a cul-de-sac of narcissistic subjectivity, Hauerwas anticipates that others will identify with elements of this “I” who is “trying to tell the story of how I learned to think theologically” (p. 20). Moreover, this approach is again designed to develop Hauerwas’ claim of the inextricable relationship between politics and theology, so that doctrine is not concocted in the abstract but occasioned by the experiences of Christians in the world. Even writing a significant theological sentence is dependent on the latter, as Hauerwas explores in “How to Write a Theological Sentence”. Hauerwas takes up Robert Jenson’s sentence that “God is whoever raised Jesus from the dead, having before raised Israel from Egypt” to contend that theological sentences should render the “familiar strange” (p. 123). Here “whoever” questions readers’ presuppositions that they “know who God is” prior to “how God makes himself known” (p. 134).

Following Eugene Garver’s For the Sake of Argument: Practical Reasoning, Character, and the Ethics of Belief, Hauerwas asserts that theology is “practical reason” and therefore inseparable from ethics. This central assertion is embodied in the book’s movement from an emphasis on methodology to a consideration of its social and political ramifications. These later chapters on political theology, “rights”, and remembering the poor are Hauerwas’ rejoinder to the recurrent critique, particularly from Nicholas Healy, that his ecclesial focus compels him and his readers to disregard the world.

Hauerwas’ answer to the latter moves into central focus in the postscript with his response to Healy’s Hauerwas: A (Very) Critical Introduction (Eerdmans, 2014). Healy claims that Hauerwas conflates David Kelsey’s categories the “logic of belief” (the meaning and interrelatedness of dogmatic statements) with the “logic of coming to believe” (apologetic statements appealing to the non-believer) and the “logic of Christian living” (how one lives out Christian convictions), so that the latter two categories engulf the former (Healy, p. 52). In response, Hauerwas agrees with Healy that he merges the “logic of belief” with the “logic of living out our beliefs” (p. 268). Following Hans Frei, Hauerwas remains convinced of the essential relationship between doctrine and life, and declares that living out the logic of our beliefs challenges the “narcissism that threatens all accounts of our coming to believe” (p. 268). Healy asserts that Hauerwas’ prominent ecclesiology “fails to be sufficiently theocentric” (Healy, p. 16); but Hauerwas shows that Healy misunderstands his aim to reveal how the “parts [of theology] fit together” in a way that does not divorce doctrine from the “ways of life in which doctrine does work” (p. 271). Thus, Hauerwas is not theologically “thin” (Healy, p. 102), but theologically saturated: “God” is not a detached category around which other topics find a place, but is throughout all that one might say theologically. This in turn explains why Hauerwas does not map tidily onto the abstract typologies that Healy employs in his critique.

Hauerwas advises that this work is “not a collection of random essays” (p. 7), but its slightly haphazard nature parallels “how” Hauerwas does theology: not via prolegomena and systematization, but through imitating Paul in occasional “letters to the church” (p. 24). Hauerwas’ content is also narratival, again mirroring its (apologetic) form, as apologia is derived from the Greek root meaning “story”. Despite its accessibility, this is not an introductory work; Hannah’s Child or Resident Aliens would be better starting points. The Work of Theology is, after all, a defense, with numerous references to previous arguments and theorists. The plethora of references invites readers into an interesting conversation, yet they will find themselves wanting to give Hauerwas their ear, to listen to the story (apologia) he is telling. Hauerwas thus achieves his aim to “attract” others to join him in the work of theology.

Elizabeth Culhane is a theology tutor and teaching assistant at Ridley College, Melbourne. Her interests include systematics, constructive theology, and ethics, especially with respect to ecclesiology.

* This review was originally published in Anglican Theological Review 98.3.