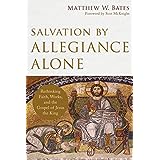 MIKE BIRD: In this book you argue that pistis should often – but not always! – be understood with connotations of “allegiance.” So rather than justification by faith alone we have justification by allegiance alone. Dude, seriously? You do know it’s like the 500th anniversary of the Reformation right? Aren’t you turning faith into a work, confusing law and gospel, or adding works to the child-like faith of the Bible?

MATTHEW BATES: Mike, dude!, I am a native of California. So I seriously like how in touch you are with my native lingo. It’s, like, really touching, man. It’s heart-speak, bro.

It would be impossible not to notice that this is the 500th anniversary as publishers are opportunistically hocking Reformation-themed books left and right. And I can see why some feel that my title, Salvation by Allegiance Alone, is a pointed challenge or an insult to the cause. In fact, upon learning of my title, Martin Luther did not just roll over in his grave, but performed four somersaults. It’s troubling—especially as I am a Protestant, albeit an ecumenically minded one.

I am arguing in the book that “faith” and “believe” do not correspond very well to the Greek words pistis and pisteuō in describing what is necessary for salvation in the New Testament. In particular the range of meaning carried by pistis is not just faith or belief (in something), but also faithfulness, trustworthiness, and the like. This is well-known to all New Testament scholars and uncontroversial. It may be slightly less well known that pistis can also mean loyalty or allegiance in the New Testament time period, but this should likewise be uncontroversial.

In light of this, I am asking something quite controversial: Why have scholars, pastors, and church leaders tended to exclude the loyalty or allegiance portion of pistis with regard to salvation? Could this have more to do with Protestant anxieties about “works” than we would like to admit?

As to whether I have simply turned faith into a work, or confused law and gospel, I’ve attempted to fend off these charges in Chapter 5. Readers will have to make their own judgments about whether I have slipped the noose.

MIKE BIRD: You make the case that the gospel is about king Jesus – the crucified, risen, and exalted Jesus – to whom allegiance is our best response. You go so far as to say, “Jesus’s reign as Lord of heaven and earth fundamentally determines the meaning of ‘faith’ (pistis) as ‘allegiance’ in relation to salvation. Jesus as king is the primary object towards which saving ‘faith’ – that is, our saving allegiance – is directed.” Why do you think this?

MATTHEW BATES: This question gets to the heart of Salvation by Allegiance Alone. Why should we feel compelled to reassess the meaning of “faith” (pistis)? Above all because the gospel itself demands this reevaluation. Yet the gospel has frequently been truncated and misunderstood—even within churches and organizations that claim to be gospel-centered or gospel-driven. (Yes, I respect much of what happens over at The Gospel Coalition, but I would include many TGC folks in my assessment here!)

If you ask someone, What is the gospel?, you will hear about faith, trust, the cross, forgiveness—and perhaps justification, Jesus’s righteousness rather than our own, and the resurrection. If you’re lucky you might hear that Jesus is Lord. But you won’t hear about Jesus’s enthronement. This is the central problem: an inadequate articulation of the gospel has prevented us from seeing what saving “faith” really involves.

Certainly most Christians believe that Jesus is the king, but this is felt to be a fact extrinsic to the gospel rather than intrinsic to it. The gospel is frequently summarized: “just trust in Jesus’s death for your sins and you are saved.” A more scholarly way of describing this view would be to equate the gospel with “justification by faith alone.” That is, we are “saved” when we have faith in Jesus, trusting him alone rather than our works.

When the Bible articulates the gospel precisely, its climactic energy lands on how Jesus has become the “Christ” or “Lord” or “Son-of-God-in-Power,” all titles that speak of Jesus’s exalted sovereign role (see Romans 1:3-4, 1 Corinthians 15:3-5, 2 Tim 2:8). Moreover, in the Gospels, Jesus’s proclamation of the nearness of the kingdom of God anticipated his own installation at the right hand of God (e.g., Mark 14:61-62; cf. Matt 19:28; 25:31-32). The climax of the gospel is Jesus’s enthronement as king.

So, yes, we are saved by pistis (traditionally “faith”) in Jesus Christ, but we can’t treat “faith” and “Christ” as if the relationship between these words is devoid of a demand for ongoing allegiance between a loyal subject and a sovereign king.

April 22, 2017
Review of Acknowledging the Divine Benefactor
Next Post