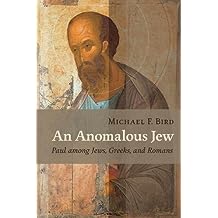 Over at Jesus Creed, Scot McKnight reviews my book An Anomalous Jew: Paul among Jews, Greeks, and Romans. It’s quite positive, and I think Scot nails me and the book with these words:

If you read this carefully — and Bird often requires careful readings — you see the back and forth of the salvation historical and the apocalyptic as well as both continuity and discontinuity. I found this dialectic and both-and throughout the first few chapters. Bird’s Paul is closer to the “old” or Reformation Paul than to the new perspective, though he might disagree. He’s both in some ways, but he fights the new’s lack of (I’ll say it, Augustinian) anthropology while he fights the old’s lack on understanding Judaism and the themes of continuity. He whacks the apocalyptic standard bearers a few times for too much Barth and Torrance and not enough Judaism and apocalyptic literature.

July 4, 2017
The Smurfs, Hamilton, and Caitlyn Jenner: A Christian Response to Identity Politics
Next Post

July 11, 2017 John's Gospel as Transfiguration Story
Recent Comments
0 | Leave a Comment
Browse Our Archives
get the latest from
Euangelion
Sign up for our newsletter
POPULAR AT PATHEOS Evangelical
1

Christians, COVID-19, and the Dangerous Idol...
The Chorus In The Chaos
Books by This Author Books by Mike Bird