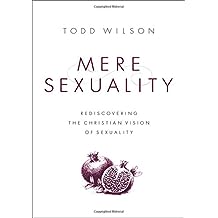 Competing visions of sexuality are now simply taken for granted in mainstream western culture, and so Todd Wilson addresses timely questions. What is the core living tradition about human sexuality which Christians of all sorts, through all ages, have embraced? And why is that tradition precious, plausible, and worth preserving? Just as in Mere Christianity C. S. Lewis sought to articulate a common core of Christian belief which would rally Catholics, Protestants, and Orthodox believers, so Wilson seeks to sidestep intramural skirmishes to articulate an integrated biblical theology of what it means to be sexual beings.

After arguing for the existence of a historical Christian consensus on sexuality, the second chapter raises the startling topic of Jesus’ own sexuality. It seems scholars have known for a while now that Jesus had a penis, but the theological implications of that for our own humanity have not always been well thought through. Chapter three jumps back to creation to articulate a classical vision of male and female in the image of God. Wilson rules out a constructivist views of gender while mostly leaving unsaid the evangelical shibboleths to do with gender roles in church and family.

The next three chapters then enumerate the main ways human sex expresses itself: in marriage, in sexual intercourse, and in friendship. Here obviously the biggest gap will emerge between Wilson and his Catholic readers – which, despite the aim of articulating a Lewisian ‘mere’ sexuality, was always going to be tricky. The final chapter is a short eschatological reflection to complete the vision of the future of sexuality. It’s a shame the two appendices are not better integrated in the book, particularly the second which is a very moving personal account by another pastor of the impact of sexual abuse on his own sexuality. This is a very important balance to the almost prelapsarian perspective of the first six chapters – some people I know will need to read this appendix first.

My suspicion (confirmed once I reached the acknowledgments at the end) was that this was book was originally preached as a series of sermons. It is clearly written by a pastor-theologian who feels his congregation’s desperate need for solid grounding against the strong crosswinds of culture. In that regard the book’s value is in more than the sum of its parts. For instance, if you really just want to explore the issue of same sex relationships and the plausibility of celibacy in the church then pick up Wesley Hill’s Washed and Waiting and Spiritual Friendship (in fact, the present book draws heavily from, and is dedicated to, Wesley Hill). But of course the issues of sex, love, marriage and friendship are all connected. So if you want to get a solid theological overview of the whole issue, then Mere Sexuality does a great job of tying the threads together into the larger tapestry.

As much as it pains me as a biblical studies guy to say: we need theology. Proof-texting the Bible’s offhand references to homosexuality is not going to equip our young people with what they need to embody a wholly alternative vision of what it means to be human. This theological and integrative approach is desperately overdue. Next time I’m preaching a church weekend away on sex, this is the first book that’s going on the bookstall.