Women Leaders in Romans 16 – Some Things to Read!

For me, it was reading Romans 16, noting all the women that Paul mentions, noting what he describes them doing, that brought me to the egalitarian position.

A couple of great things on the women of Romans 16 has just been published.

First, over at Commonweal, Michael Peppard has an article on Household Names: Junia, Phoebe, and Prisca in Early Christian Rome. After analysing the women mentioned, he points out: “For those keeping score, that’s five evangelistic “workers” and one “apostle” among the women Paul greets at Rome—not counting the “minister” carrying the letter itself.”

Second, British scholar, Dr. Paula Gooder, is about to release her debut historical novel called Phoebe, about the letter-carrier nominated in Romans 16. Looks like one to read! Here’s the blurb:

Sometime around 56 AD, the apostle Paul wrote to the church in Rome. His letter was arguably his theological masterpiece, and has continued to shape Christian faith ever since. He entrusted this letter to Phoebe, the deacon of the church at Cenchreae; in writing to the church that almost surely met in her home, Paul refers to her both as a deacon and as a helper or patron of many. But who was this remarkable woman?

In this, her first work of fiction, Biblical scholar and popular author and speaker Paula Gooder tells Phoebe’s story – who she was, the life she lived and her first-century faith – and in doing so opens up Paul’s theology, giving a sense of the cultural and historical pressures that shaped Paul’s thinking, and the faith of the early church.

Written in the gripping style of Gerd Theissen’s The Shadow of the Galilean, and similarly rigorously researched, this is a book for everyone and anyone who wants to engage more deeply and imaginatively with Paul’s theology – from one of the UK’s foremost New Testament scholars.

Hebrews: 5 Books Every Pastor Should...
Crux Sola: Formed by Scripture to Live like Christ
Books by This Author Books by Mike Bird 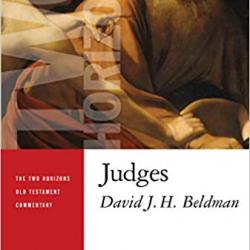 Evangelical
David J.H. Beldman on the Book of Judges
Euangelion