Stephen Chester on Reading Paul with the Reformers 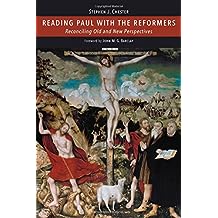 This book by Stephen Chester is a terrific effort at showing the relative differences and parity between the Reformers (esp. Luther, Melanchthon, and Calvin) and modern scholarshipship typified by the New Perspective on Paul (NPP) and apocalyptic Paul interpreters. It was a worthy winner of the Christianity Today book of the year award in biblical studies.

Chester takes issues with some interpreters who either caricature or dismiss Reformed exegesis of Paul as either completely mistaken or deeply mistaken on some points (his main targets here are N.T. Wright and Douglas Campbell). Chester in particular opines the aggravated denials made about Protestant interpreters and the rhetorical denunciations whereby anyone who disagrees with certain NPP formulations are simply slumbering in the regressive pastures of the Reformers (p. 326).

Chester’s overall thesis is that “the Protestant Reformers of the sixteenth century have insights into the interpretation of the Pauline letters that can assist us as we attempt to interpret the same texts in and for contemporary contexts” (p. 1). Chester declares that they are not right on every issue, but their insights cannot be ignored. We need to sift their exegetical conclusions critically and bring them into conversations with our own questions and concerns. Chester also accepts that the Reformed/Protestant view of Judaism as an allegory of medieval works-righteousness was rightly corrected by the NPP. However, he points out that the NPP really involves a magnification of certain themes already extant among the Reformers (e.g. the importance of union with Christ, the significance of covenant, and believers becoming one family). So the NPP rhetorical repudiation of the Reformers is very much sawing off the branches they are sitting on in many respects.

Chester covers sixteenth-century hermeneutics. He examines shared convictions among the Reformers inherited from Augustine, convictions pertaining to the human plight, and salvation in Christ. Chester also presents an individual survey of Luther, Melanchton, and Calvin as Pauline interpreters. Finally, and what is the best part of the book, is the contemporary applications that Chester draws in reframing the Reformers and the NPP.

Three areas where Chester disagrees with the NPP are: (1) The introspective conscience of the west – Paul’s view of sin was always backwards looking; (2) works of the law and the nature of Judaism – the phrase works of the law means the distinctive Jewish way of life but without any reference to boundary markers, so Paul’s critique of works of the law is “God’s grace in Christ disregards any and every dimension of human worthiness including even observance of a nomistic way of life”; and (3) justification by faith – the Reformers are less contractual and more relational than is often alleged, they emphasize the alien nature of righteousness which is organically related to union with Christ.

In my mind, sections 9.2 and 9.5 alone with worth the price of the book, a great discussion on justification, union with Christ, and transformation: “The event of justification does not simply yield or lead to something else. Justification not only was an apocalyptic event but continues to remain an apocalyptic event. Believers do not journey away from the apocalypse of Jesus Christ but are borne along by it. God’s invasive grace in Christ is the flood upon which the ark of the Christian life floats”  (p. 369). I totally agree with his discussion of Rom 6:7 about “justified from sin” and how union with Christ includes ending slavery to sin (p. 396). His examination of Romans 4 shows that one can integrate insights from Luther, Calvin, Michael Gorman, Douglas Campbell, and N.T. Wright, resulting in a helpful synthesis: “Paul’s denial of the capacity of human deeds to justify, his emphasis on the worldwide family of Abraham, and his explanation that justifying faith is participatory, uniting the believer with Christ and his righteousness”  (421).

A few areas of disagreement or different nuancing with Chester.

I concur with Chester that “works of the law” are not just boundary markers and not ethical works-righteousness either. Also, he’s right, that the social practices that make up Jewish life are multiple and complex, from Philo to Qumran. In my mind, the works of the law refer to the Jewish way of life codified in the Torah (Francis Watson) and Paul’s point is that there is a problem with humanity that Israel’s covenant and Torah cannot fix (Bruce Longenecker). However, when I read Menahem Stern’s Greek and Latin Authors on Jews and Judaism as well as what Justin Martyr and Trypho argue about in the second century, the emphasis in discussions comes down to Jewish separation and insularity from Gentiles. So, of course, works of the law are not just boundary markers, but we must countenance the powerful social implications of obeying the law in Greco-Roman contexts, which is what everyone seems to have noticed! So I want to push the social side a bit more.

Chester affirms the significance of corporate themes for justification but he rejects the idea that justification has a covenantal dimension. I think for Chester union with Christ and initiation into the body of Christ is as corporate as one needs to be. Chester worries that covenant is inadequate to communicate the radical nature of Paul’s theology of grace that informs his teaching about justification and assaults all notions of human worthiness (399-400). I would reply that (1) covenant constitutes the instrument in which God relates to his people, thus, covenant is the canvass upon which justification, adoption, and reconciliation must be plotted; and (2) While Paul critiques any idea of human worthiness (Rom 4:4-5; 5:8), still, in many places he is arguing that Gentiles do not have to become Jews in order to become Christians; so matters relating to rites of initiation and group membership, belonging to the new covenant, cannot be excised from discussions of justification. Francis Watson and Peter O’ Brien spoke in terms of justification having a vertical aspect (forensic status coram deo) and a horizontal aspect (ecclesial, familial, and covenantal). I’ve affirmed that position myself, though now I am coming around to Wright’s – I think better – explication that justification as having forensic and covenantal aspects, a status before God and a status within the believing-community.

Otherwise, this is a terrific book, showing the relative parity between the Reformers and much of NPP and even apocalyptic Paul readings of Paul’s letters. Chester offers a kind of retrieval and defense of the Reformers as interpreters that can correct and even reinforce much of the NPP. I don’t agree everywhere, but he’s shown that cavalier dismissals of the Reformers are not giving them their due.

For those wanting something similar, I’d recommend my article, What if Martin Luther Read the Dead Sea Scrolls?

Also, check out Garwood Anderson’s Paul’s New Perspective for another via media between Reformed, NPP, and Apocalyptic Paul interpreters. Watch out for Matthew J. Thomas on Paul’s “Works of the Law”  In the Perspective of Second Century Reception, which will fill a big gap in our studies of Paul and Judaism.

July 12, 2018 5 Books to Help You Understand the Bible Better
Recent Comments
0 | Leave a Comment
"Let us face facts: Communion, whether the spirit of Jesus is there or not, is ..."
Kyllein MacKellerann What Happens in the Lord’s Supper ..."
"Off topic question: In what type of body did Moses and Elijah appear to the ..."
Gary M Rom 3:21-26 – Translates, Paraphrase, Notes
"Very good and helpful article, succinctly sums up the core ideas of biblicism. Contrary to ..."
Alin Christoph Cucu What is Biblicism?
"I am sorry, but a theologian with Dr. Richter's reputation, training, and influence should not ..."
Chris Arch Sandra Richter Responds to John Piper
Browse Our Archives
get the latest updates from
Euangelion
and the Patheos
Evangelical
Channel
POPULAR AT PATHEOS Evangelical
1

On Not Throwing the Baby Out...
Roger E. Olson
Books by This Author Books by Mike Bird