Just came across an article (thanks to Logan Williams) by Richard Bauckham where he defends his notion of divine identity:

I have very rarely said that “Jesus is identified with God,” because that phrase is too vague, as Kirk’s ability to use it regularly about his idealized human figures shows. Or it could be taken to mean that “Jesus is identical with God,” as James Dunn has misunderstood me to be claiming.29 I chose the term “included in the identity of God” not because it is more vague than “Jesus is God” or “Jesus is divine” but because it is more precise. Jesus, in early Christian Christology, is not the whole of God, not identical with God,30 not another god alongside or subordinate to the God of Israel. All those are ways in which “Jesus is God” or “Jesus is divine” might be understood. The NT uses the word θέος predominantly of the one whom Jesus called his Father, and only occasionally of Jesus himself—in important but carefully selected contexts. But at the same time, early Christology was redefining the identity of God such that the relationship between Jesus and his Father is understood to be internal to God’s own identity. 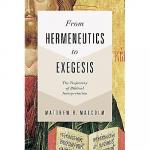 March 11, 2019
Book Review: From Hermeneutics to Exegesis
Next Post 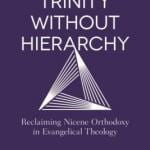 March 15, 2019 Three New Books on Trinity and Subordination
Recent Comments
0 | Leave a Comment
Browse Our Archives
get the latest from
Euangelion
Sign up for our newsletter
POPULAR AT PATHEOS Evangelical
1