New Book on Divine Sonship in the Ancient World

I think this is the proceedings from the St. Andrews conference from a few years back. Here’s the blurb:

In antiquity, “son of god”—meaning a ruler designated by the gods to carry out their will—was a title used by the Roman emperor Augustus and his successors as a way to reinforce their divinely appointed status. But this title was also used by early Christians to speak about Jesus, borrowing the idiom from Israelite and early Jewish discourses on monarchy. This interdisciplinary volume explores what it means to be God’s son(s) in ancient Jewish and early Christian literature.

Through close readings of relevant texts from multiple ancient corpora, including the Hebrew Bible, the New Testament, the Dead Sea Scrolls, Greco-Roman texts and inscriptions, early Christian and Islamic texts, and apocalyptic literature, the chapters in this volume speak to a range of issues including messianism, deification, eschatological figures, Jesus, interreligious polemics, and the Roman and Jewish backgrounds of early Christianity and the authors of the Dead Sea Scrolls. The essays in this collection demonstrate that divine sonship is an ideal prism through which to better understand the deep interrelationship of ancient religions and their politics of kingship and divinity. 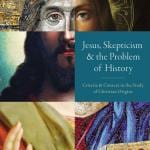 April 1, 2019
Jesus, Skepticism, and the Problem of History
Next Post

April 6, 2019 Who does the Ministry in Ephesians 4:12?
Recent Comments
0 | Leave a Comment
Browse Our Archives
get the latest from
Euangelion
Sign up for our newsletter
POPULAR AT PATHEOS Evangelical
1

What Happened to David French?
Young Fogey
Books by This Author Books by Mike Bird