In my mind Rom 12:1-15:7 is not a convenient abstract of Pauline ethics and church life, it is rather, a vision for how the Roman house churches can indigenize the Pauline evangelical vision in Rome as it relates to relationships within the community and outside the community, in the seat of empire, surrounded on all sides by disbelieving Jews and suspicious pagans. What appears to be an eclectic collection of Pauline aphorisms is materially organized as Paul’s response to the “hostility, which in the Roman situation has been experienced both inside and outside the Christian community.”[i] Paul, as part of his mixture of apostolic fund raising effort and preventive pastoral care for a potentially fractious cluster of house churches in Rome, engages in some moral exhortation for churches lodged in an adversarial context, which reflects a number of motifs and mandates from Jewish, Jesuanic, and Greco-Roman traditions.

Following on from Rom 12:1-8, the succeeding exhortations in 12:9-21 are terse and appear generalized, often hard to map against a precise intertext, and perhaps reflect a general spectrum of Jewish and Greco-Roman moral discourse. In favour of seeing Paul as resourcing his exhortations on a series of scriptural texts in his mental carry bag, we could aver that Paul treats the authenticity of love as a determining factor for their behaviour, in regards to both their internal relationships with each other and also in how they relate to outsiders, which arguably anticipates the citation of Lev 19:18 in Rom 13:9-10 concerning love as the fulfilment of the Torah. In the cause of authentic love, Paul says that they must abhor what is evil and cling to what is good, and by doing so they themselves follow the Isaianic script set out for Israel’s Davidic deliverer (Isa 7:15-16). They should share in people’s joys and griefs (Sir 7:34) and avoid high mindedness about themselves (Prov 3:7).  It is in 12:17-21 that Paul urges against a habit of retaliation and revenge, as is commonly repeated among Hellenistic Jews, they must not “repay evil for evil” (e.g. Jos. Asen. 18.14; 23.9) and instead see themselves as paragons of civic virtue (Prov 3:4) and peacemakers who depart from evil and do good (Ps 33:15 [LXX]). In support of that claim, Paul makes an explicit citation of Deut 32:35 about leaving vengeance to God and an allusion to Prov 25:21-22 about assisting one’s enemies. This disposition constitutes Paul’s primary proof of refusing evil and embracing the good. For in the end, good triumphs over evil not by replicating it, but by rejecting it and replacing it with a love shorn of all hypocrisy.

August 13, 2019
Joel Marcus' Retirement Lecture: The Parting of the Ways
Next Post 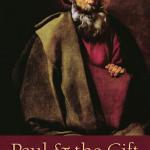 August 19, 2019 Reflection on John Barclay's Paul and the Gift
Recent Comments
0 | Leave a Comment
"A very helpful video, Mike. Thanks for taking the time to make it and post ..."
Randy Richards Can Christians Commit the Unforgivable Sin?
"The condemnation of Rom.8:2 is death's reign. And yes, those who believe in Jesus are ..."
edwitness What Happens in the Lord’s Supper ..."
"Right, to those who are in Christ, there is no longer any condemnation. If you ..."
Ed Senter What Happens in the Lord’s Supper ..."
"The text of Joshua seems clear that the inhabitants of Canna were annihilated as in ..."
the old scribe Lost World of the Israelite Conquest
Browse Our Archives
get the latest from
Euangelion
Sign up for our newsletter
POPULAR AT PATHEOS Evangelical
1