Origen: An Introduction to His Life and Thought

Ronald E. Heine
Origen: An Introduction to His Life and Thought
Cascade Companions.
Eugene, OR: Cascade, 2019.
Available from Wipf & Stock.

Ronald E. Heine has written a short, informative, and readable intro to Origen. There is a lot on Origen’s early life and context, his time in Alexandria and Caesarea. Probably the highlight is how Heine explains Origen’s rationale for allegorical and deeper readings of Scripture, very, very good. Also, Heine demonstrates that Origen is a genuine biblical interpreter, not a platonic philosopher playing loosely with a few biblical texts. There is also a good section on Origen’s eschatology.

My only disappointment is that I wanted a bit more on Origen’s theology of incarnation, esp. how Origen set up the scene for the Arian/Nicene debate. Added to that, something on the Origenist controversy of the fifth century would have been useful as well.

Otherwise a very fine introduction to Origen, who he is, why he matters, and recovering him as a biblical interpreter. 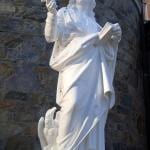