Introducing the New Testament in its World Podcast

I’m very happy to announce that we have launched a podcast to go with our book The New Testament in its World where I interview a star cast of eminent scholars on the New Testament and we hear from N.T. Wright on several subjects.

In this podcast, Wright and I explore many of the topics covered in our book – questions about the purpose of the New Testament; the meaning of the resurrection; the life and ministry of Paul; what it was like to live as Christians in the first century; and more.

Episodes feature interviews with well-known New Testament scholars, as well as behind-the-scenes conversations we had while they worked on the New Testament in Its World filming project that took them to Jerusalem, Galilee, Athens, Corinth, and Rome.

Listen wherever you get your podcasts—or stream the audio below. You can also visit NewTestamentWorld.com to download a free, in-depth guide to each episode, which includes show notes, discussion prompts, and resources for further study.

3 – Jeannine K. Brown, the Jewish Context of Jesus, and “Faith in Christ” vs. “Faithfulness of Christ”

5 – Esau McCaulley, The Afterlife in Greco-Roman Thought, and Teaching the New Testament 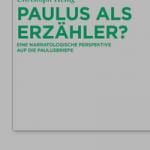 September 3, 2020
Interview with Christoph Heilig on Paul as Narrator
Next Post

September 7, 2020 JRT on Markus Barth
Recent Comments
0 | Leave a Comment
Browse Our Archives
get the latest from
Euangelion
Sign up for our newsletter
POPULAR AT PATHEOS Evangelical
1

The Fundamentalist War on Wokeness is...
Euangelion
Books by This Author Books by Mike Bird