Here are three good podcast episodes that I recommend you to listen to this week:

First, Two Cities podcast, the group talks to Dr. Kristin Kobes Du Mez about her book Jesus and John Wayne. This was a bit weird to me because it is soooo American and we Aussies don’t have this problem of religion and politics. But a fascinating interview.

In this episode of The Two Cities podcast we talk with Dr. Kristin Kobes Du Mez, professor of history at Calvin University, about her book Jesus and John Wayne: How White Evangelicals Corrupted A Faith and Fractured A Nation (Liveright, 2020). Over the course of the conversation Dr. Du Mez tells us about some of the most shocking findings from her book, how Jesus and John Wayne fits within her longstanding research interests in militant Christian masculinity in the US, and how those themes can be traced through the teachings of key Christian leaders like James Dobson, John Eldridge, Douglas Wilson, Doug Phillips, John Piper, Mark Driscoll, Jerry Falwell Sr., and Jerry Falwell Jr., among others. We also go beyond the book in connecting the insights from it to the events of January 6, the insurrection at the Capitol building, and the recent attempts to overthrow American democracy. The Two Cities team members on the episode include Amber Bowen, Dr. John Anthony Dunne, Grace Emmett, Grace Sangalang Ng, Rev. Daniel Parham, Chris Porter, and Dr. Logan Williams.

Tom answers listener questions on the upcoming US election, religious freedom in the case of Christian cake makers, and the concept of ‘white privilege’ in current debates on racial justice. I actually wish I was on this one cause there’s several things I was positively dying to add.

The British historian Tom Holland author of the book Dominion is interviewed by British author and comedian Andrew Doyle (of Titania McGrath pseudonym notoriety!) about Christianity and Western Civilization. FYI, make sure you follow Titania McGrath on twitter, read Andrew Doyle in Spiked, and check out Tom Holland’s book and his podcast called The Rest is History. 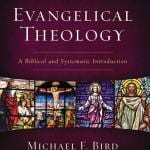 February 1, 2021 Podcast Interview with Outpost Theology
Recent Comments
0 | Leave a Comment
Browse Our Archives
get the latest from
Euangelion
Sign up for our newsletter
POPULAR AT PATHEOS Evangelical
1

Why Evangelicals Are So Disliked, Part...
Cranach
Books by This Author Books by Mike Bird

Are You Part of a Mastermind Group?
A number of years ago I discovered the idea of a Mastermind...
view all Evangelical blogs
What Are Your Thoughts?leave a comment
Copyright 2008-2020, Patheos. All rights reserved.