Over at Christianity Today is my popular piece When Violent Nationalism Backfired for God’s People.

Most of it is behind a paywall, but hey, the CT subscription is always worth it!

This article uses Jesus’ rejection of the zealot option for ushering in the kingdom as a lens for understanding the attempted insurrection in the US capitol building. In a nutshell, God’s kingdom does not need revolutionary violence, in fact, Jesus says that the kingdom is explicitly against such violence.

What took place at the US Capitol in January happened to be set in America: an unruly mob, some bearing Christian banners, smashing their way into a nation’s halls of power to overturn a democratic election and fulfill prophecies that foretold their political messiah. But the impulses driving the violent act—and subsequent threats of violence—were all too visible to Jesus in his day. He saw their inevitable disastrous end, and he warned his followers not to be seduced by the power of the sword.

For those interested, you can also read my article: Michael F. Bird, “Jesus and the Revolutionaries: Did Jesus Call Israel to Repent of Nationalistic Ambitions,” Colloquium 38.2 (2006): 127-39 from my Academia.edu page. 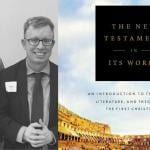 February 27, 2021 Did God Make the Angels?
Recent Comments
0 | Leave a Comment
Browse Our Archives
get the latest from
Euangelion
Sign up for our newsletter
POPULAR AT PATHEOS Evangelical
1