Get it hot off the press, Michael F. Bird and Scott D. Harrower, The Cambridge Companion to the Apostolic Fathers (New York: CUP, 2021).

The Cambridge Companion to the Apostolic Fathers offers an informative introduction to the extant body of Christian texts that existed beside and after the New Testament known to us as the apostolic fathers. Featuring cutting-edge research by leading scholars, it explores how the early Church expanded and evolved over the course of the first and second centuries as evidenced by its textual history. The volume includes thematic essays on imperial context, the relationship between Christianity and Judaism, the growth and diversification of the early church, influences and intertextuality, and female leaders in the early church. The Companion contains ground-breaking essays on the individual texts with specific attention given to debates of authorship, authenticity, dating, and theological texture. The Companion will serve as an essential resource for instructors and students of the first two centuries of Christianity. 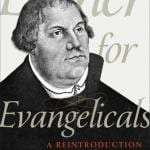 April 2, 2021 Luther for Evangelicals
Recent Comments
0 | Leave a Comment
Browse Our Archives
get the latest from
Euangelion
Sign up for our newsletter
POPULAR AT PATHEOS Evangelical
1

Christianity vs. Christendom?
Cranach
Books by This Author Books by Mike Bird