When Tenderness Finds Us

I pulled off for gas at the Hinsdale Oasis. Not exactly a place where one would expect a moment of tenderness.

Driving home from a radio interview, my mind was humming with conversation. Talking about my next book, writing in general, and other assorted topics filled me with energy. It wasn’t enough energy to fuel my vehicle, however.

In a related story, I tend to press my luck with the low fuel warnings in my car. I push past where the light comes on, I watch the needle slide into the no man’s land. For some reason, I gain the feeling of dominance over this machine (on which I am completely dependent, by the way) by choosing when I want to stop for gas.

Wisdom must win more often in my driving. So I stopped for gas.

Filling up the tank, breathing in the cold, I surveyed the folks around me. A late evening soft commute flew by on the expressway. I saw people buying giant sodas and beef jerky, stubbing out a fading cigarette, trying to appease the cries of a young child weary of the car ride.

I sensed a hardness in the air. The harsh chill of the Chicago late winter pressed on us. The brutality of travel and transportation 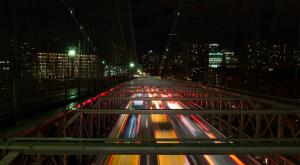 floated like a vapor over our heads. Everyone nurtured a hope that the rapidly flowing traffic would continue to flow, long enough to usher us into the friendly confines of our homes.

It’s easy to keep your head down, politely acknowledging others but keeping a low profile as to say, personally, “Come this far but no further.” We don’t welcome others into our world, and we don’t intrude into theirs.

There is too much at stake to enter the mess of another person – their ache, their violence, and their loss.

I closed the door and resumed the episode of This American Life I was listening to. It was the story of a school maintenance director in Schenectady, NY who created an empire of torment and manipulation in his staff. It was fascinating. And disturbing. The episode had the same hardness of the cold commute, the journey from nowhere to where we truly want to be.

To rejoin the commute, I had to pass a line of tractor-trailers on the right. The tight regimen of beasts appeared to sleep, their darkened cabs like closed eyes, resting.

I gathered speed and noticed on the right the door of one cab swung open, and a rather large truck driver hopped out. In the dark, it looked like he clutched a large brown package to his chest.

“Certainly that’s not what I think it is,” I thought. It looked like a baby.

It wasn’t. I came closer and recognized that the rough-edged driver clutched a large brown bull terrier to his chest. This was far more interesting.

He carried the dog across the entrance ramp and into a hard formerly grassy space just beyond the curb. The dog came to balance on the hard cold ground, unsure that he wanted to be outside in the piercing wind chill.

“I feel you, friend,” I said out loud to no one but the car.

I accelerated to highway speed, at least the highway speed that suited my desires, and joined the metal and fuel hardened world again.

But my thoughts were different.

Often we go through life only seeing the sharp edges, the force of abuse and the starkness of physical and emotional violence. The speed and force of vehicles reinforced that feeling as I drove, as did the story on the podcast.

Then the image recurred – a man whose trade was in travel, mechanics, and exchange carried his dog like a child. There was care and grace in him, care for a companion who made the solitary journey whole and holy.

In the midst of every day, we need these moments of tenderness.

The events of a life wash over us, sometimes like a soft tidal current and other times like a tidal wave. We feel the fierce hardness of a commute, a divorce, an addiction, or a world that seems hell-bent on bending hell around our minds.

Into those moments, the stories of Jesus bring the tenderness of God’s love into reality.

When the brutality of death enters our story, all of our stories. Jesus encounters a family who felt the hardness of their daughter passing into night. Jesus comes near, comforting them.

She’s just napping, this will be fine.

The cars whiz by. A long commute feels traffic. A dispute turns bitter and acrid in our marriage.

They laughed at Jesus, knowing that when it comes to disease and biology it is a zero-sum game. The mortality rate for humans is still 100%.

Same darkness, different day. Then, the cab swings open and the man and his dog descend into my day. Into our day.

Before the miracle, before the rising from the dead, Jesus reveals his own fierce tenderness. He took her by the hand. Jesus didn’t have to touch her at all, in fact he didn’t even need to be in the same room.

But he knew they needed the presence of tenderness.

We all need a softening of the edges, the presence of Jesus releasing the hardness of all that we can’t avoid.
In fact, we need to see a man carrying a dog in the fierce cold night at the Hinsdale Oasis.

(Photo by Jan Tonellato on Unsplash)

New Year, Same Me...Kinda
Hello Again! Friends, it's been a while. Life has a way...
view all General Christian blogs
What Are Your Thoughts?leave a comment
Copyright 2008-2017, Patheos. All rights reserved.